What use is a popup form if you end up just showing it to everyone? This can be frustrating for users and also hurt your conversion rates.

That's where our behavioural rules come in. Rules allow you to specify very tailored rules that only show your Capture once they are satisfied.

The result is a more targeted experience and increased flexibility in what you can achieve with your campaigns. 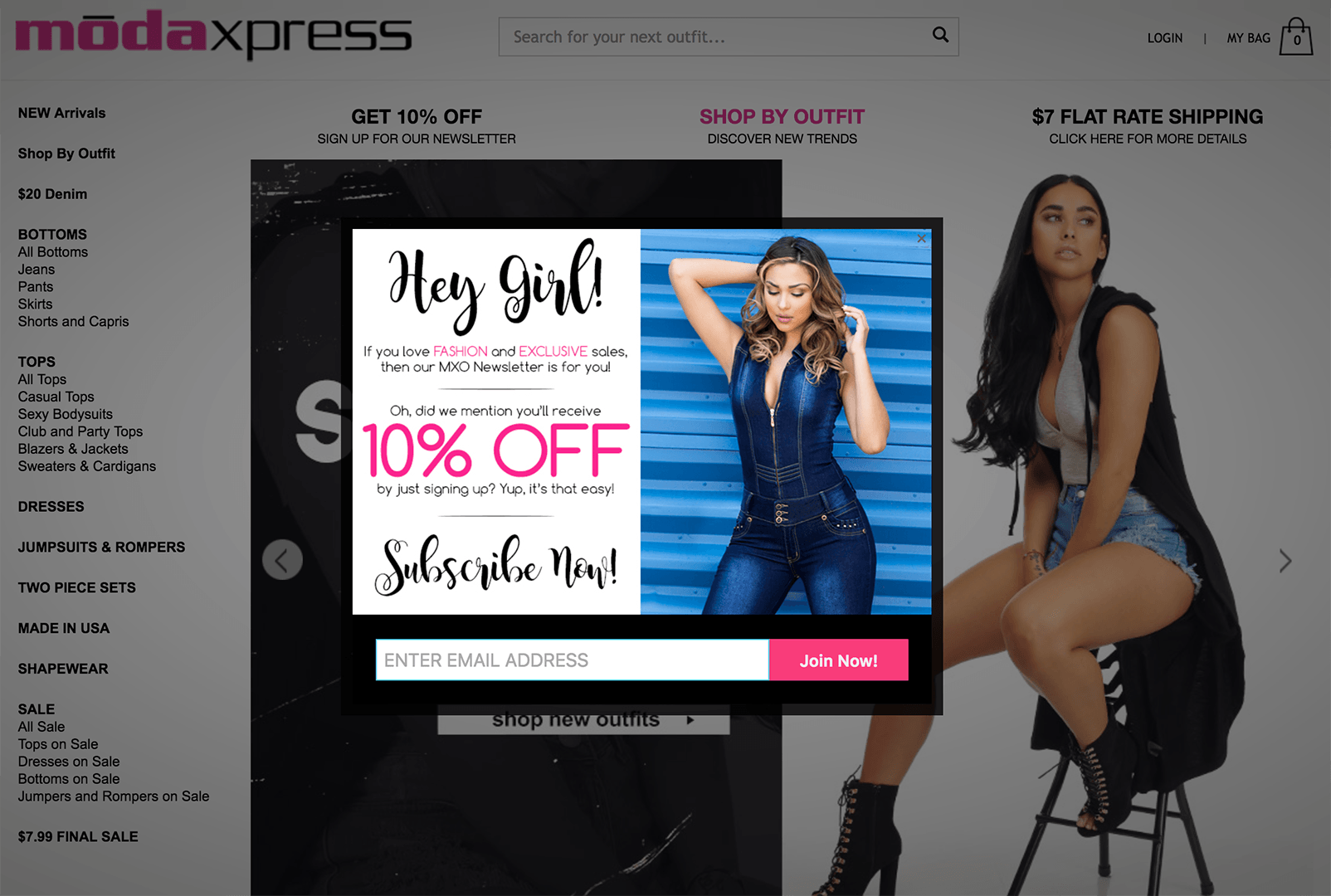 The possibilities are endless, but here's a breakdown of the most popular uses for our Behavioural Rules:

Before we dive into the rules it's important first to understand how they work.

Everything inside a specific rule group is chained together with AND, which means everything must be satisified for the Capture to show.

For example, the Capture above will show on the following conditions:

By default on all plans except Premium your Rules are grouped into a single rule group. On the Premium Plan you can create multiple rule groups.

This can be useful if you want to adapt a rule to function differently without having to create a separate Capture.

Remember that groups are chained together via OR, so it's possible for one group to override another simply because the first group gets ignored but the user satifies the second group of rules.

When you create a new Capture or add a new Rule Group we add a few default actions:

These actions just ensure that your Capture stops showing when someone either completes it or closes it. If you remove these you might annoy users so be careful. 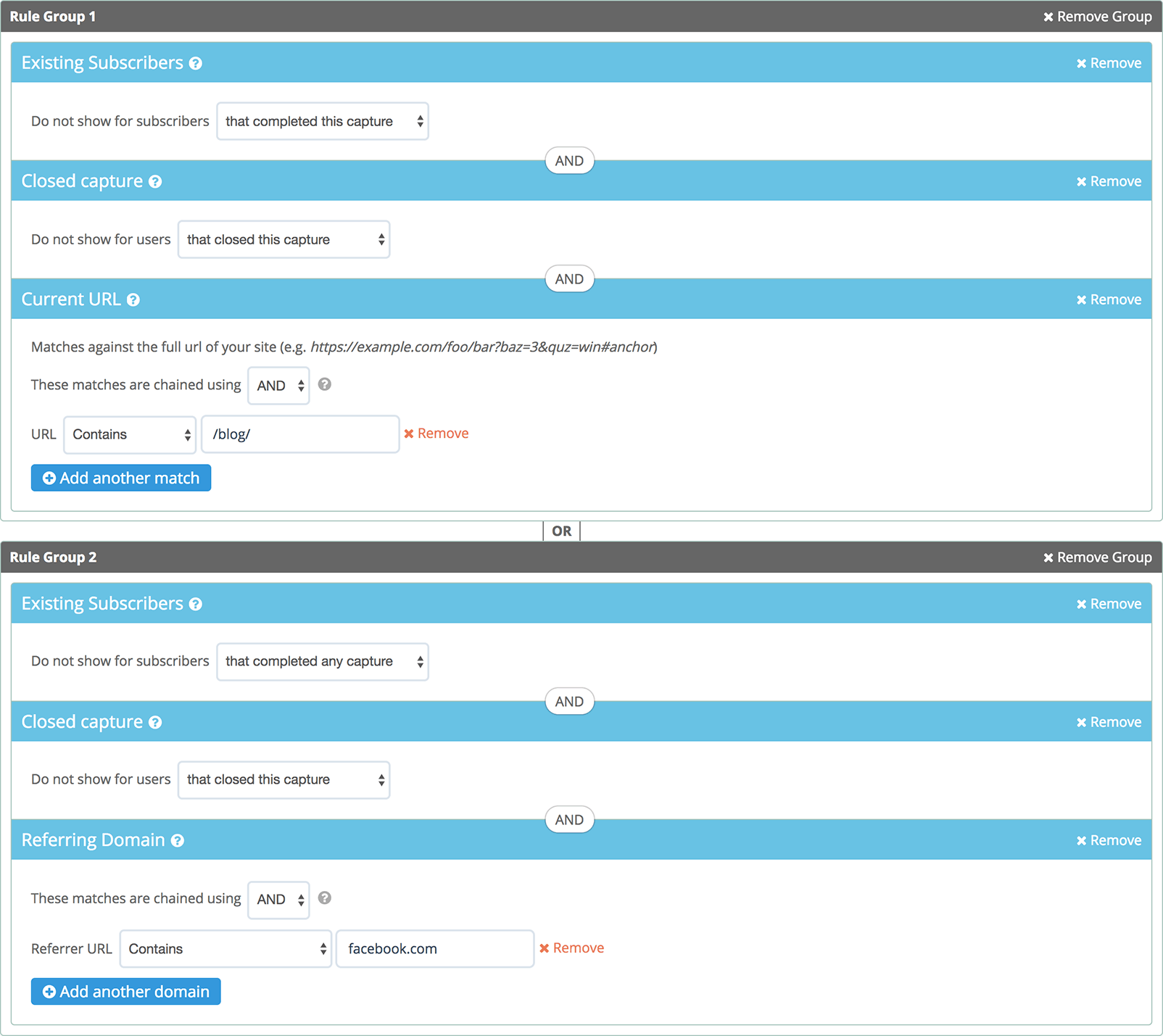 The example able has two Rule Groups, the first one will trigger for:

Or the second one will trigger for:

Certain rules allow you to include multiple matches which can help you set up more targetted and specific conditions for triggering your Capture.

When you add multiple matches to a rule you can choose to chain them together using either AND or OR.

Chaining a rule's matches using AND means that every condition in your rule must be met in order to satisfy the rule.

For example, this Selector rule is chaining matches using AND, so the rule will not be satisfied unless every condition is met. This means that h1 must contain "Store" and the .product-title selector must be present for the rule to be satisfied.

Chaining a rule's matches using OR means that if any condition in your rule is met the rule will be satisfied.

For example, this Selector rule is chaining matches using OR, so the rule will be satisfied if any of the conditions are met. This means that if h1 contains "Store" or h1 contains "Collection" the rule to be satisfied.

Each individual rule sits under a number of different categories:

By default we add two exclude rules to newly created Captures. You can remove these, but they are there to ensure you don't potentially annoy visitors with Captures that keep showing all the time.

The Existing Subscriber rule ensures that if someone has completed this Capture or any other Capture on your site that it won't trigger for them again. Please note, this only works for subscribers that we are aware of, not previous subscribers before you started using Capture.

The Closed Capture rule sets a cookie that prevents the capture opening for users again if they have purposely closed it.

This rule prevents a Capture from showing if a user has previously visited a specific URL on your website.

Capture must have been installed, this will not work for users that have visited specific URL's before you started using Capture.

The On Exit rule allows you to show Captures when a user is indicating that they are about to leave your site.

You can set which devices you want this to show on and also how sensisitive it is when detecting the exit.

The Scrolled % Of Page rule allows you to only show a specific capture once a user has scrolled down a certain % of the page. Perfect for articles, blog posts or longform content.

You can hide captures and just trigger them manually with this rule, the most common use of this is to create content upgrades or ways to reward users for clicking on a specific button or element on your landing page.

You can see it in action if you click the Get our latest posts via email here in this finding customers for your business blog post.

The Times Shown rules allows you to determine how often a capture gets shown to a user, you can set it per visit or ever.

The Gallery rule allows you to show Captures when a Gallery appears or when a user votes for an item in a Gallery.

Can Display After Closed Captures

This rule allows you to trigger more than 1 Capture of the same type on the same page. Say for example you want to pop up on when someone hits the page, then another when someone is about to exit.

The Selector rule can also trigger a Capture when a specified CSS Selector either contains or does not contain a certain value.

You can incorporare multiple selectors into your rule. You can have Captures trigger when any of the selector elements are present using the OR function.

Or you can require all of the selector elements to be present for a Capture to trigger with the AND function.

You can learn more about how you can use the Selector rule by clicking here.

The New Visitor rule will only popup captures to users that haven't visited your site before. Do not combine this rule with Returning or it will not work.

The Returning visitor rule will only popup captures to users that have visited your site before. Do not combine this rule with New or it will not work.

Use this rule to show a capture after a user has spent a certain amount of time on your site.

Use this rule to show a capture after a user has spent a certain amount of time on your page.

Use this rule to show a capture after a user has viewed a certain number of pages on your site.

Use this rule to show to users who have previously viewed x pages on your site.

Use this rule to show to users who have idled for x seconds on your site.

You can limit Captures to specific countries, this allows you to really tailor messaging based on where in the world your visitors come from.

For example, we use this to let users from certain countries know that we support their language in our competitions widget.

You can limit Captures to specific browser languages too.

For more granularity, you can limit Captures to show within a specific area on the map. Just surround your desired area with the geofence.

This rule allows you to popup Captures if the traffic source is direct, this means that the user comes to your site withour any referrer.

The Referring Domain rule allows you to show Captures based on the referring domain. For example, show a specific Capture for facebook.com referrals, or even referrals from your blog.

The Past Referring Domain rule allows you to show a capture based on a domain that they have come to your site from in the past.

The Current URL rule allows you to display a capture based on the current URL that the user is on. This is perfect to show a Capture on a specific page or section of your site.

The Visited URL rule allows you to display a capture based on the previously visited page on your site.

The Query rule allows you to display a capture based on a query string in the URL. For example if you use utm tags in Google Analytics, or even other query strings.

The Query rule allows you to display a capture based on previous query strings in the URL.

The Ad Blocker rule allows you to detect if a user is blocking or not blocking ads, then show (or don't show) a Capture accordingly.

The Screen Width rule allows you to display a Capture if the users screen dimensions are within the certain width that you provide.

This is useful if you want to target specific devices or screen sizes with a certain Capture.