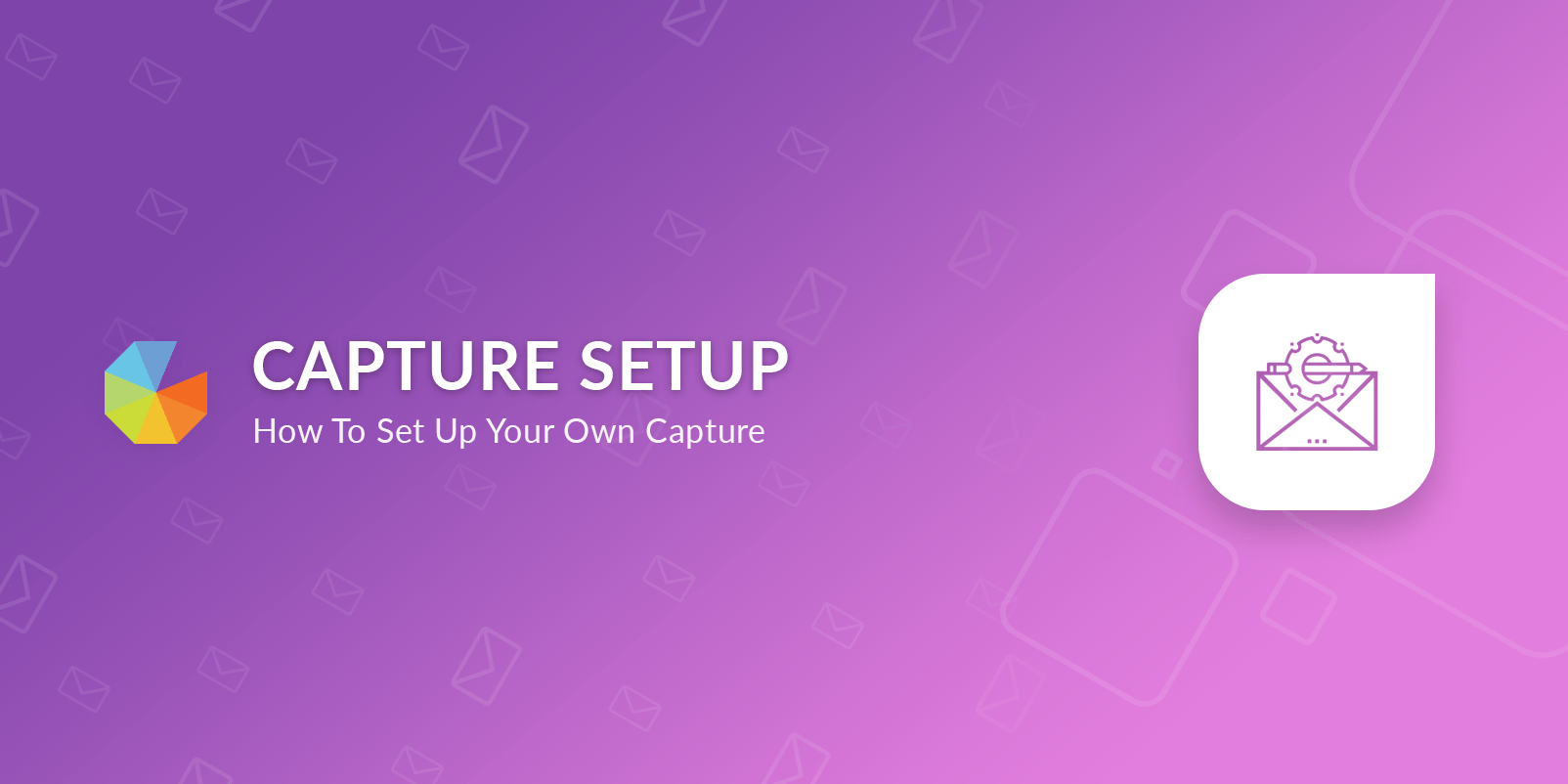 Capture is one of our easiest apps to install and get started with. One simple line of code added to the header of your website or landing page gives you the power to add opt-in forms that show based on a range of rules that you can control.

Every business collects emails, it's still one of the most powerful communication mediums around. Email gives you a direct one to one communication with your customer. You can use email to send newsletters, product updates, special offers or announcements.

Many businesses still lack the proper ability to collect emails from their customers. They also lack the ability to test new ideas and try different messaging against certain types of customers based on their behaviours.

That's where Capture comes in. We make it incredibly easy to build beautiful opt-in forms that you can setup to appear on your own terms. What's more, these forms sync with most of the major email platforms - which means you don't even have to worry about involving your tech team.

Just install our tracking script and get testing.

Installing Capture On Your Site(s)

We've built Capture to be very easy to install on your site. All that is required is to paste a single line of Javascript into your websites template.

You can grab instructions by clicking the Get Install Code button at the top of the Captures tab. 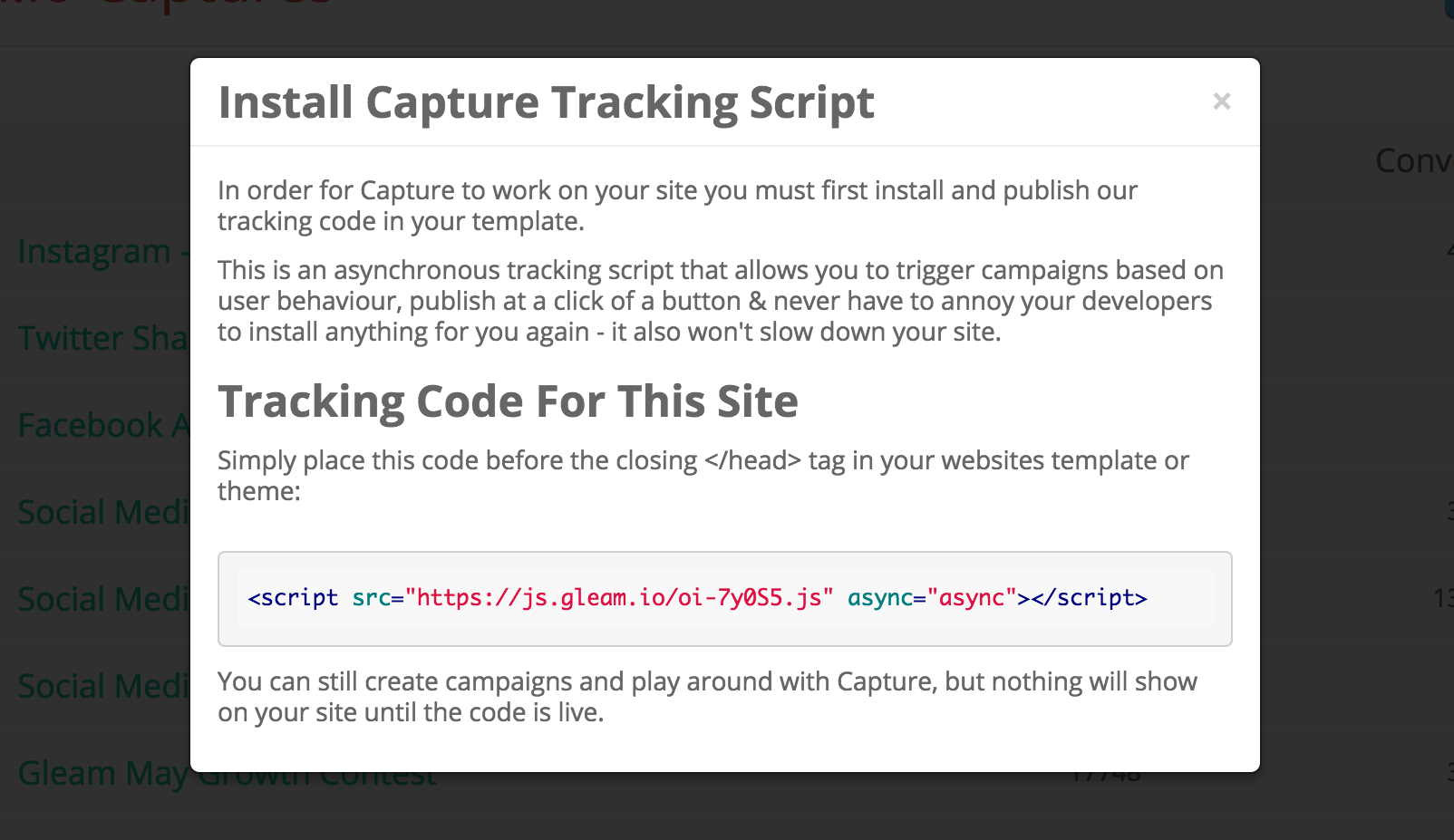 Insert Before The Closing Head Tag

If you're unsure exactly where to put the installation script here's some sample code that shows exactly where in your header to insert it.

Once this code is installed on your site you can completely control all your Capture campaigns from within the Gleam interface. This means you can test as many ideas as you want without technical help or even having to replace the script.

If you're using an Embeddable Capture template then you'll be provided an additional code to embed that Capture into your page.

Behavioural Rules are not enabled for Embedded Captures, they will always show wherever the code is added.

Capture integrates with 30+ Email Marketing providers, making it easy for you to sync data from your forms into your lists or message sequences.

Each Capture can be linked to mulitple providers via the Email Integrations tab (more on this later).

So you don't have to set this up every time you create a new Capture it can be helpful to setup a default integration via the Settings > Integrations tab in the sidebar.

Simply head over to the Captures tab in your left hand menu and click the green New Capture button at the top right, you'll then be presented with the option to select which Template you want to use. 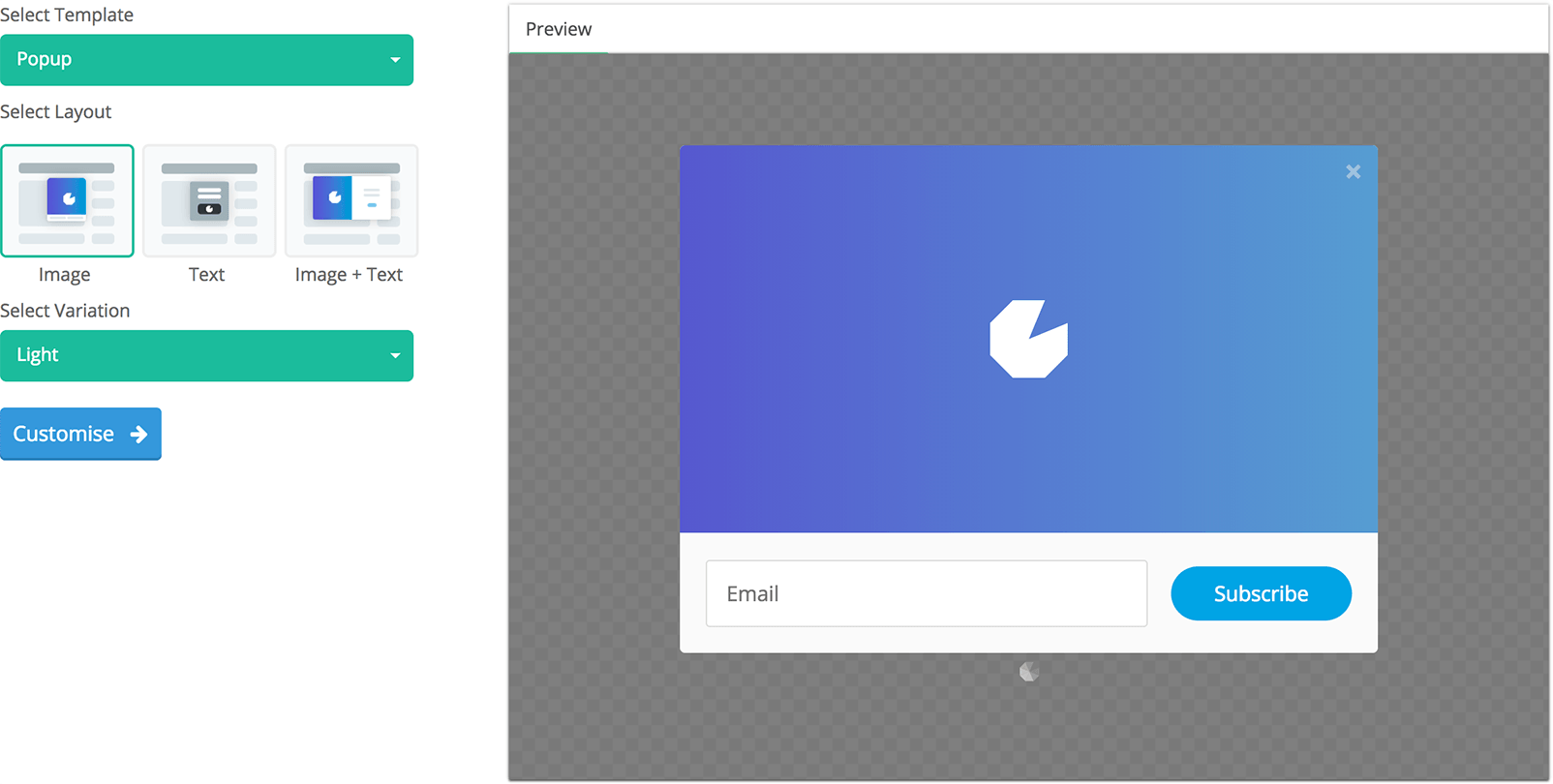 Our Templates are split up into Templates, Layouts and Variations to make it easy for you to understand the purpose of a specific Capture type.

In order to understand all the various options we've put together a separate guide that goes into detail about each Template type.

The options you see during setup may change depending on the template you've chosen, below is a guide to help you understand what each of the configuration options does.

The Layout tab allows you to: 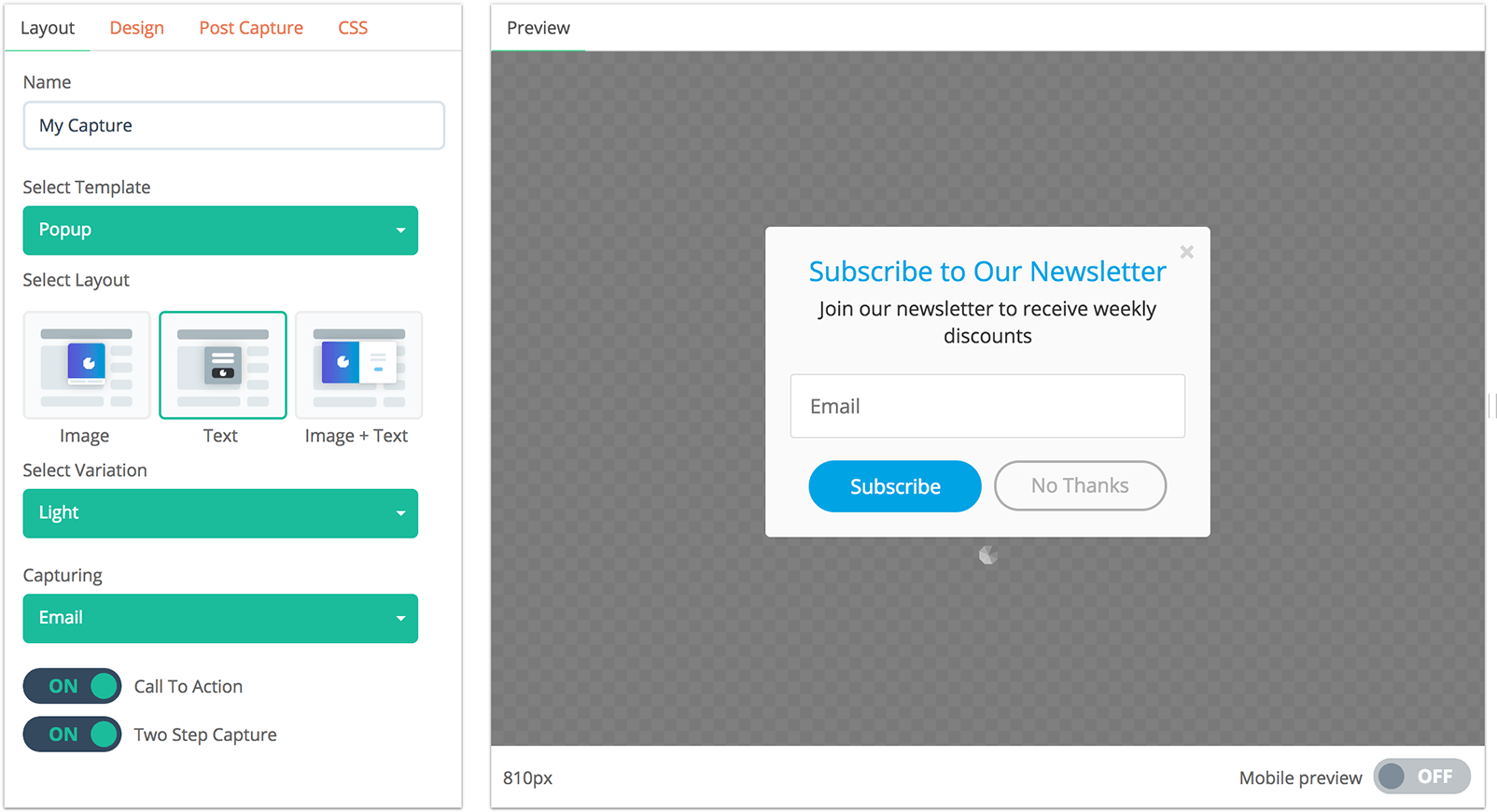 Once you choose the Variation you want to use you will then see a few additional options:

Use this option if you just want to capture email addresses without the user providing their name. 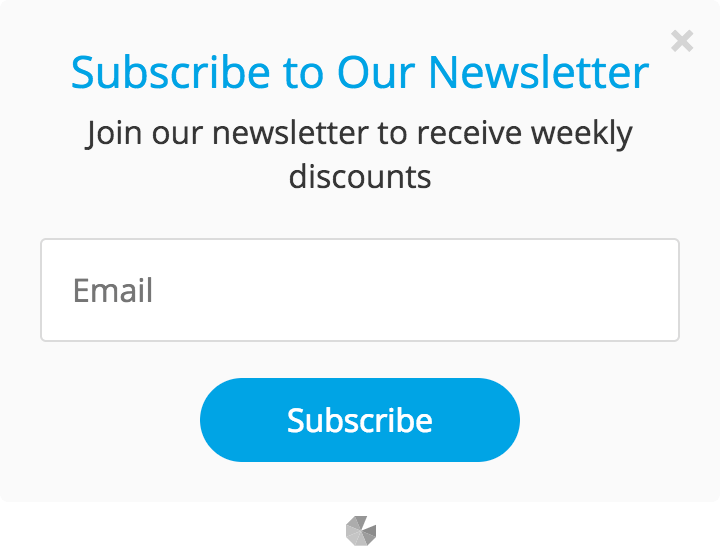 Use this option is you want to also capture a name + an email address. 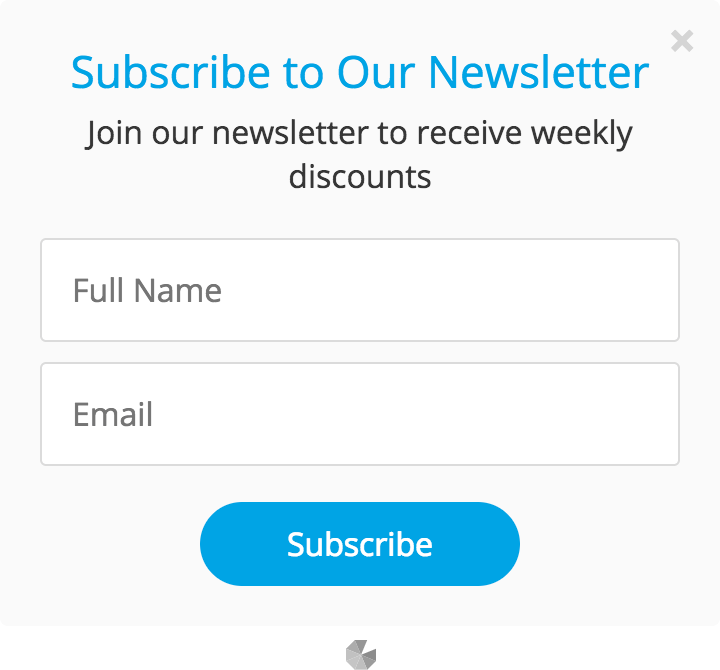 We will automatically handle if a user users their first name or full name when we sync it with your email provider.

This is a powerful feature that is often overlooked, but if you use Captures for clicks it opens up possibilities for personalisation on your site. For example you could use it to: 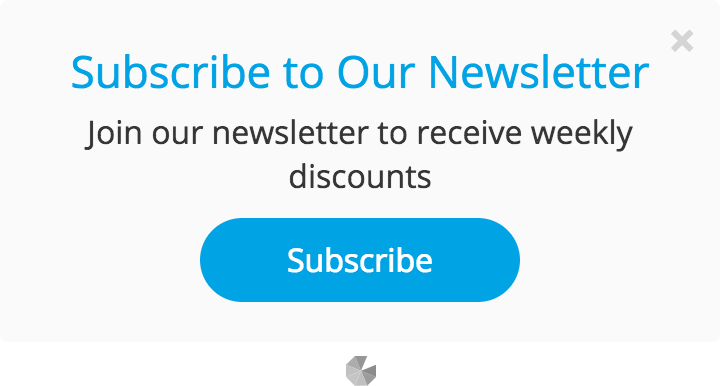 Some Variations have the ability to enable a Call to Action which allows offers a more conversational way for users to either opt-in or decline to opt-in. 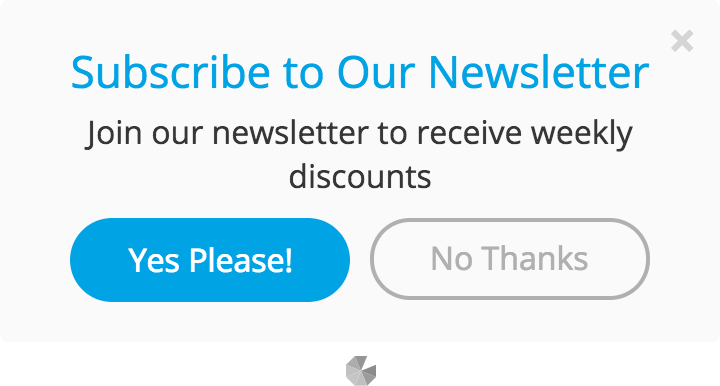 Two Step Captures allow you to have multiple steps, the first offers the ability to ask a question, then the second step faciliates the opt-in. Both steps can have different messaging.

If you're using the Coupon Capture templates then you'll see an additional Coupon tab under the Design tab. 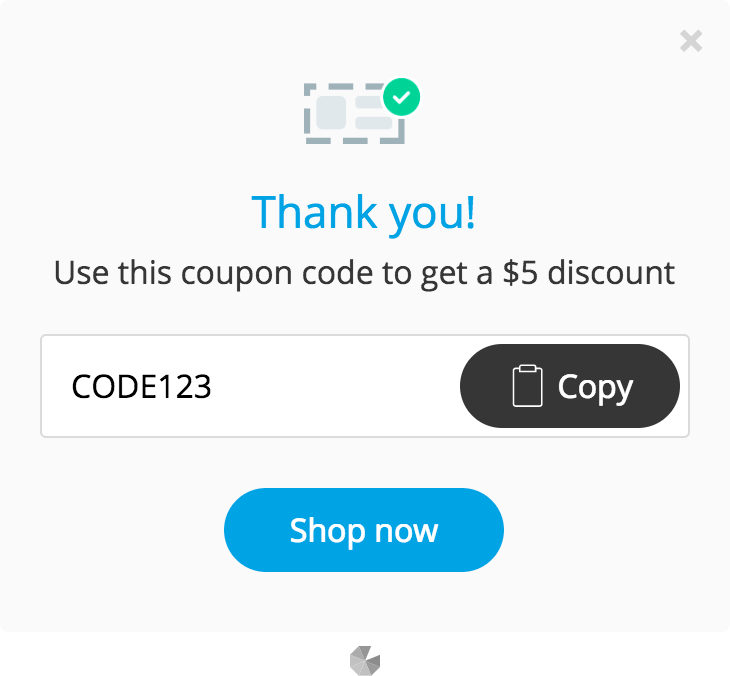 If you're using the Countdown Capture templates then you'll see an additional Countdown tab under the Design tab. 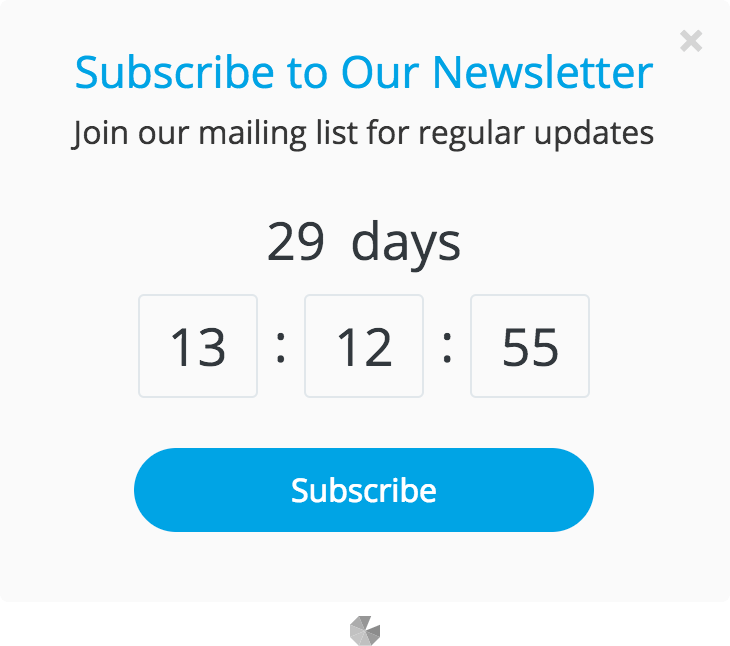 Once you've chosen your Capture and Layout settings you're ready to start adding your own touches via the Design tab.

Certain Variations have the ability to set the Display Mode:

This will stick the Capture to the desired position and make it move as the user scrolls up and down the page.

Static: Does not move

This will stick the Capture to the desired position and keep it there, it won't move.

Scroll: Hides with scrolling down

Certain Variations have the ability to set the Position:

You can control how wide you want the Capture to display with this setting, this won't affect the responsiveness of the Capture when viewed on mobile devices.

Depending on your Capture variation you'll see different options in this section. Some Captures simply allow you to upload an image. 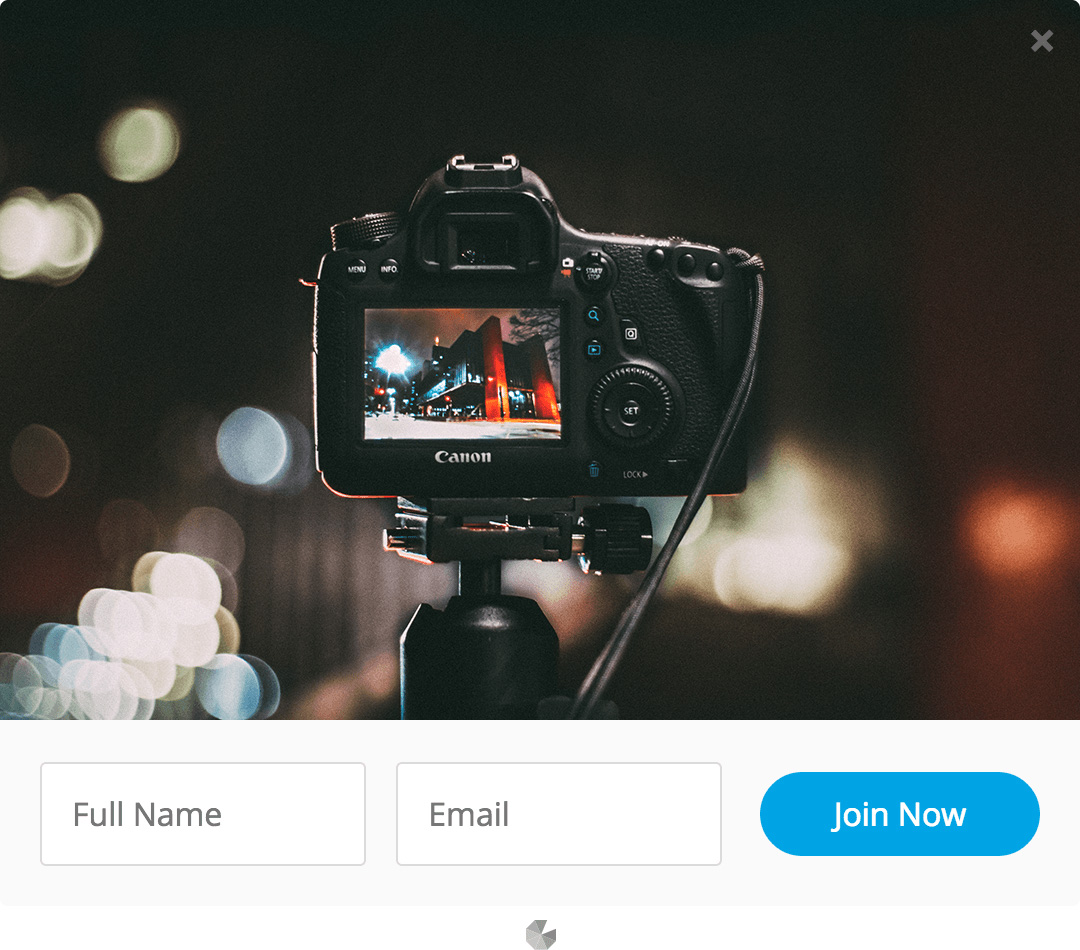 If the Capture doesn't feature an image you can sometimes also upload your image as a background. 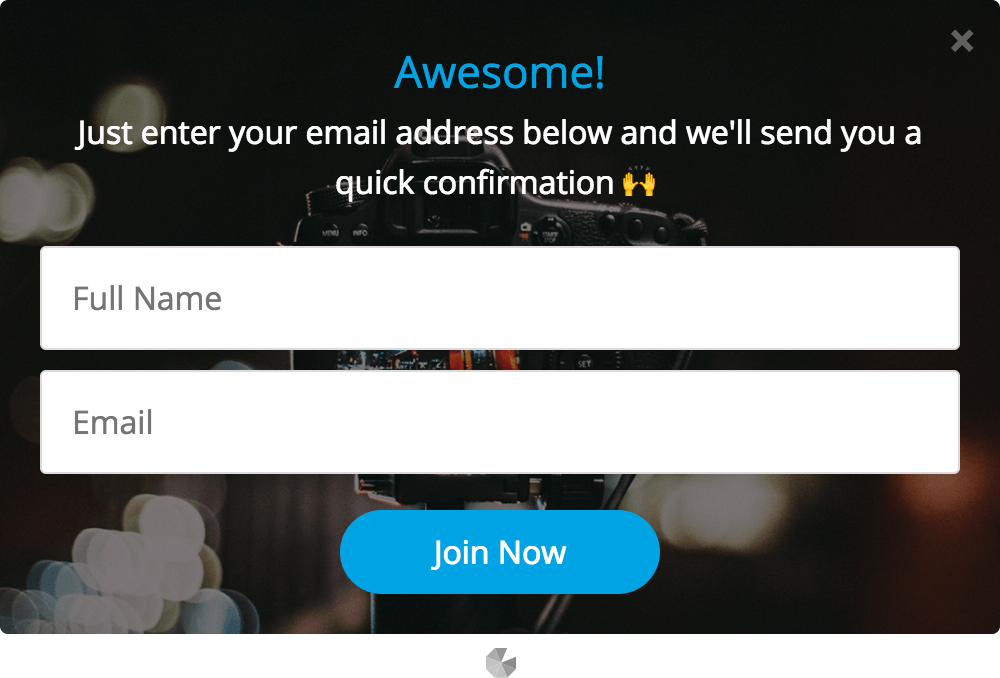 You can also change the background colours or even add a gradient to make the Capture work with your branding. 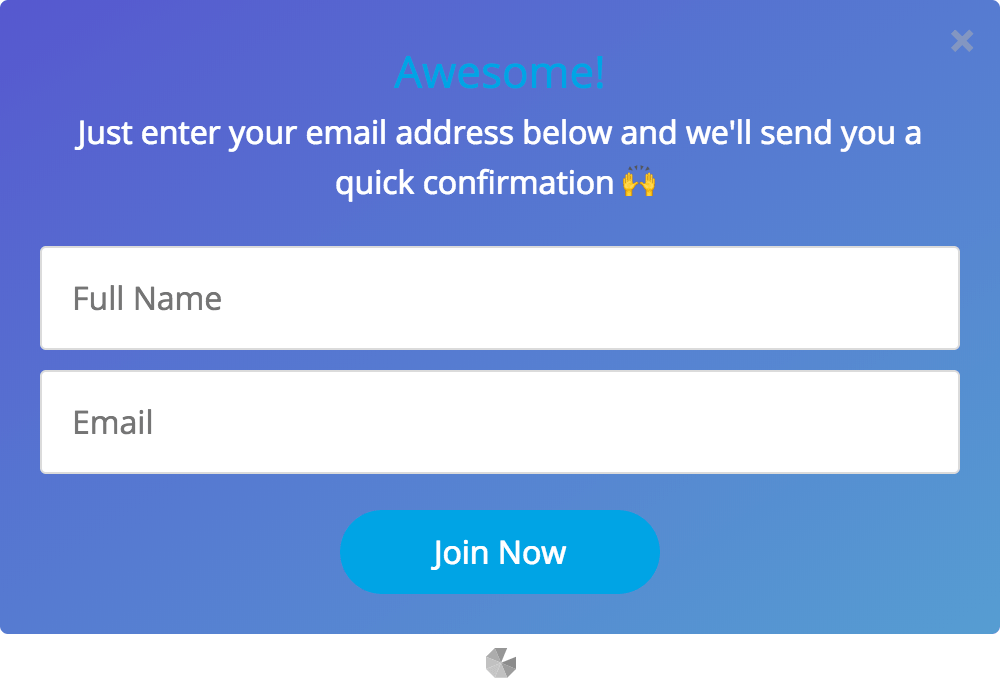 Once you set your images (or gradients) you can edit the body of the Capture. The available sections will depend on which Variation you're using.

Good copy that is relevant to users and entices them can mean the difference between good and great conversion rates, so don't be afraid to experiment 👨‍🔬

If you want to remove the Heading or the Main Text from your Capture just delete the text, the same works with any optional fields or buttons (except the main Subscribe button). 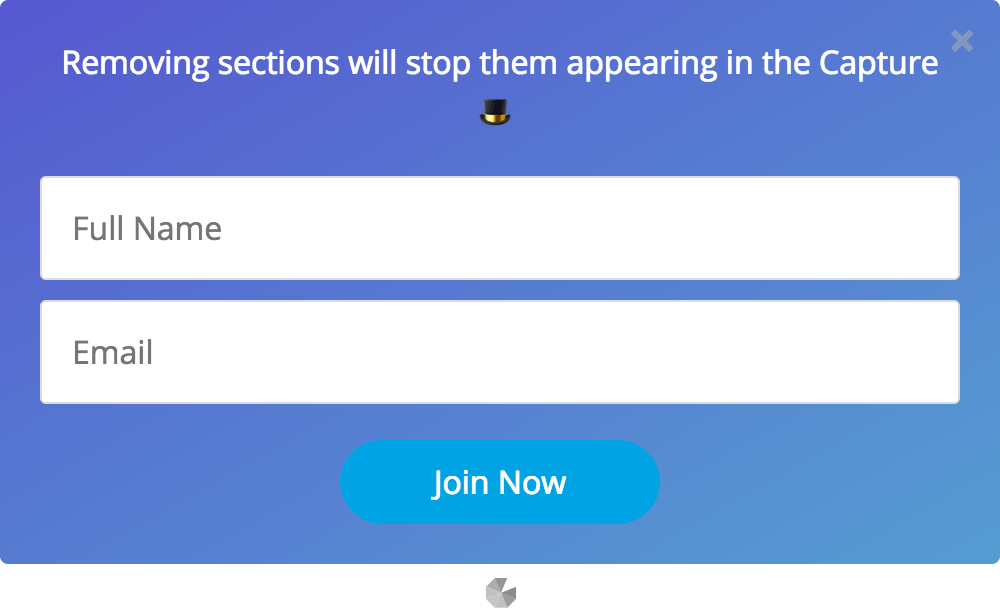 Fonts are configurable for each section inside the Design tab, you can choose from 500 different supported fonts. 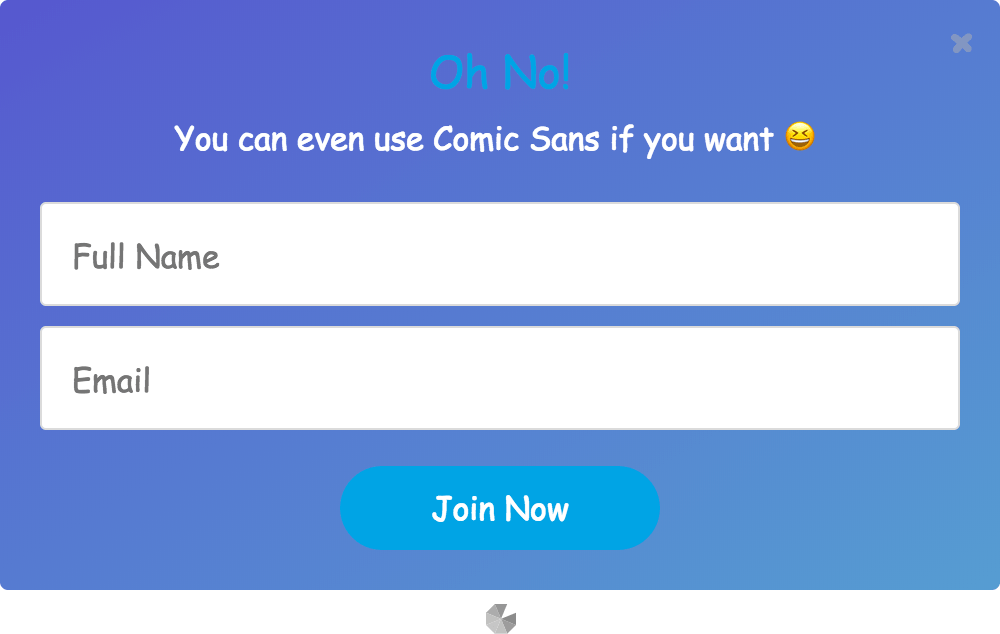 Once a user completes your Capture by either filling out their information or clicking it, you can choose what you'd like to do afterwards:

This does exactly what it says on the tin, when the Capture is considered completed nothing happens. This is useful for Click based Captures if you want them to keeping showing, not so useful for Email based Captures.

Show a brief thank-you message when the user completes your Capture. 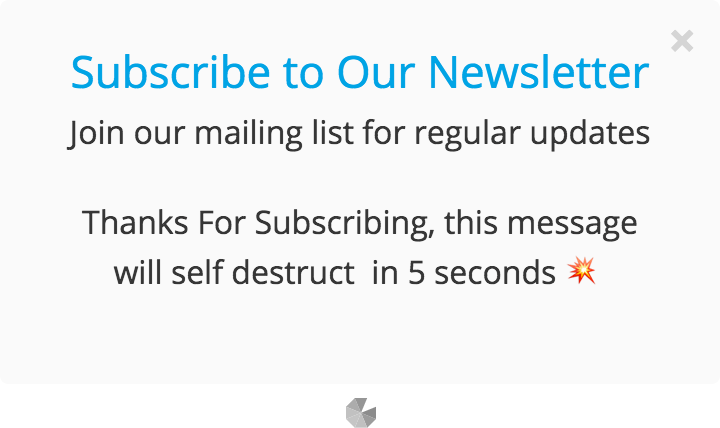 Show a brief thank-you message and also a Facebook Like button when the user completes your Capture. 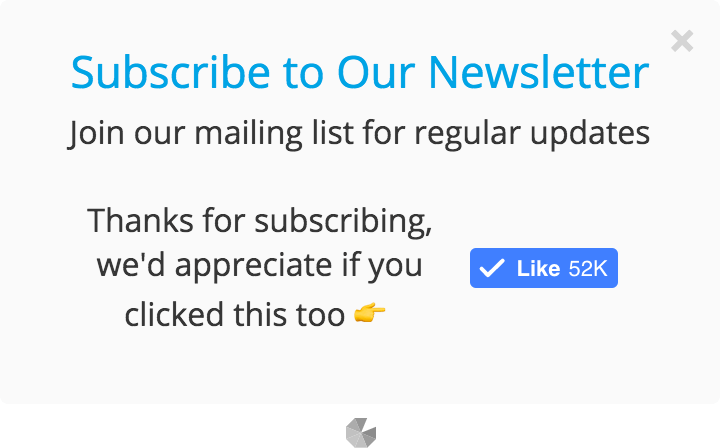 Clicks on this Like button get recorded as Events in your reporting tab.

Show a brief thank-you message then redirec the user to a specific URL after they complete your Capture.

Open a specific URL in a new browser tab after the user completes your Capture.

Trigger another active Capture campaign when the current one is completed, this can be good for chaining Captures or messages together. 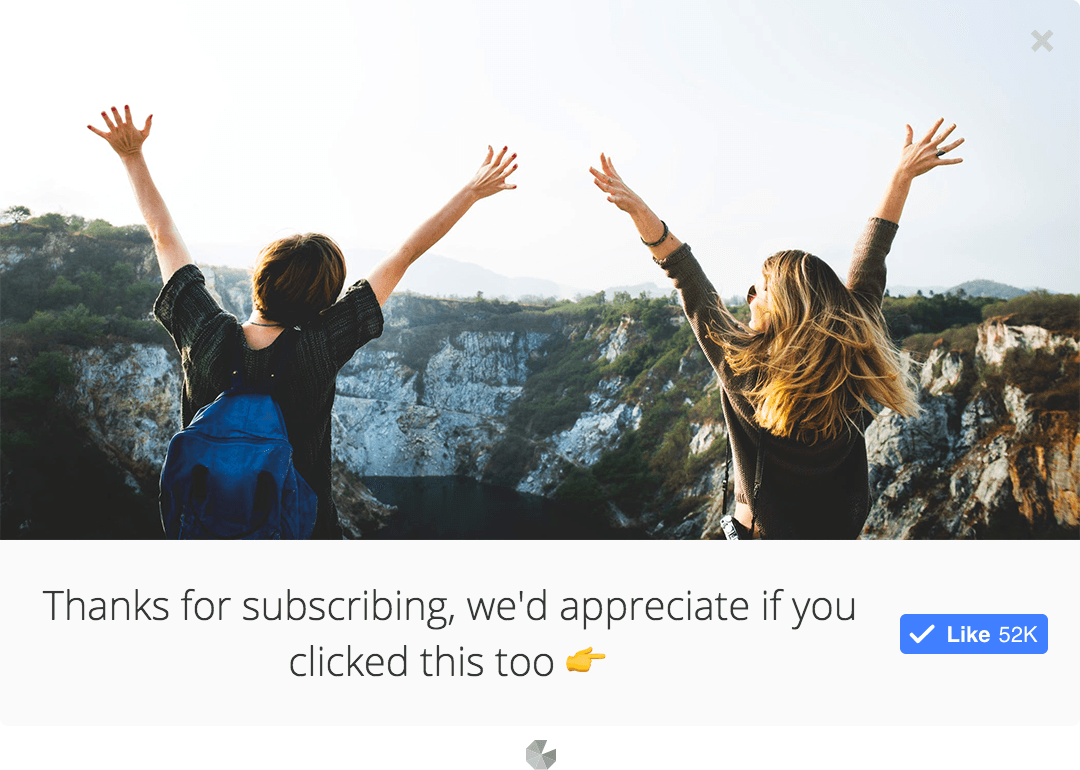 Auto Close allows you to automatically close the Capture after a set timeframe once it's completed, you can set this to 0 to close instantly.

By default some of the options above will automatically select this feature.

This option fires a specific Javascript Callback to your page once the Capture is completed. This will pass the status of the Capture and also the collected data:

You can use this to perform something specific like:

This should then provide you with the following output:

The CSS Tab offers you control over the entire CSS of any Capture template, you can use this to make small tweaks or completely change how a Capture looks.\ 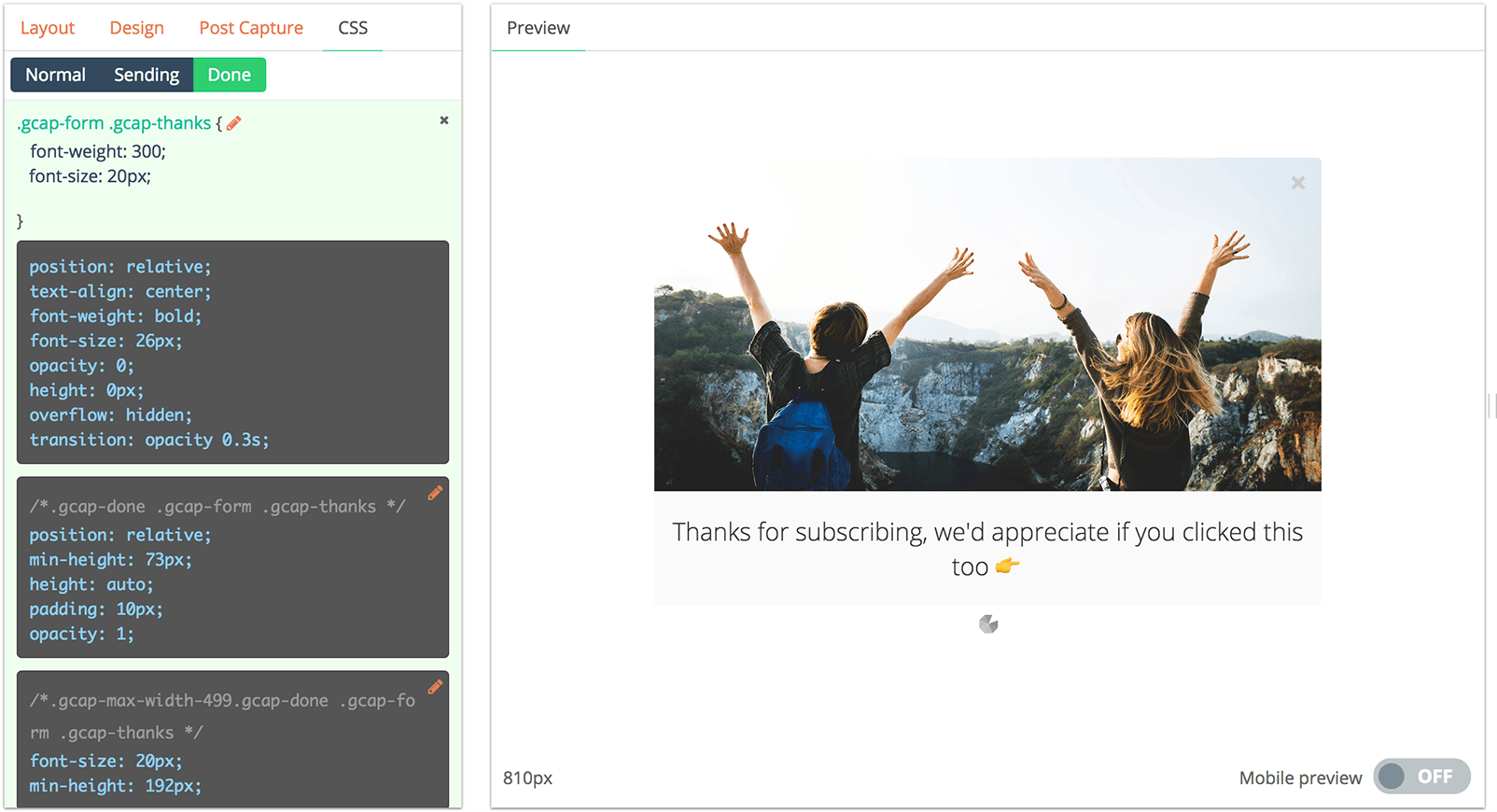 There's three states that you can control:

Clicking any element in the Capture will bring up the associated CSS class to edit.

Setting Up Your Rules

Once you've setup your Capture and have it looking exactly how you want you'll need to move onto the next step which determines when the Capture shows to users.

There's a few things that you can do to troubleshoot your Capture not showing.

We have a nifty rule debugging script that's automatically built in once you install Capture. Simply add #rule-debug to the end of any URL on your website.