Creating A Refer A Friend Reward With Gleam 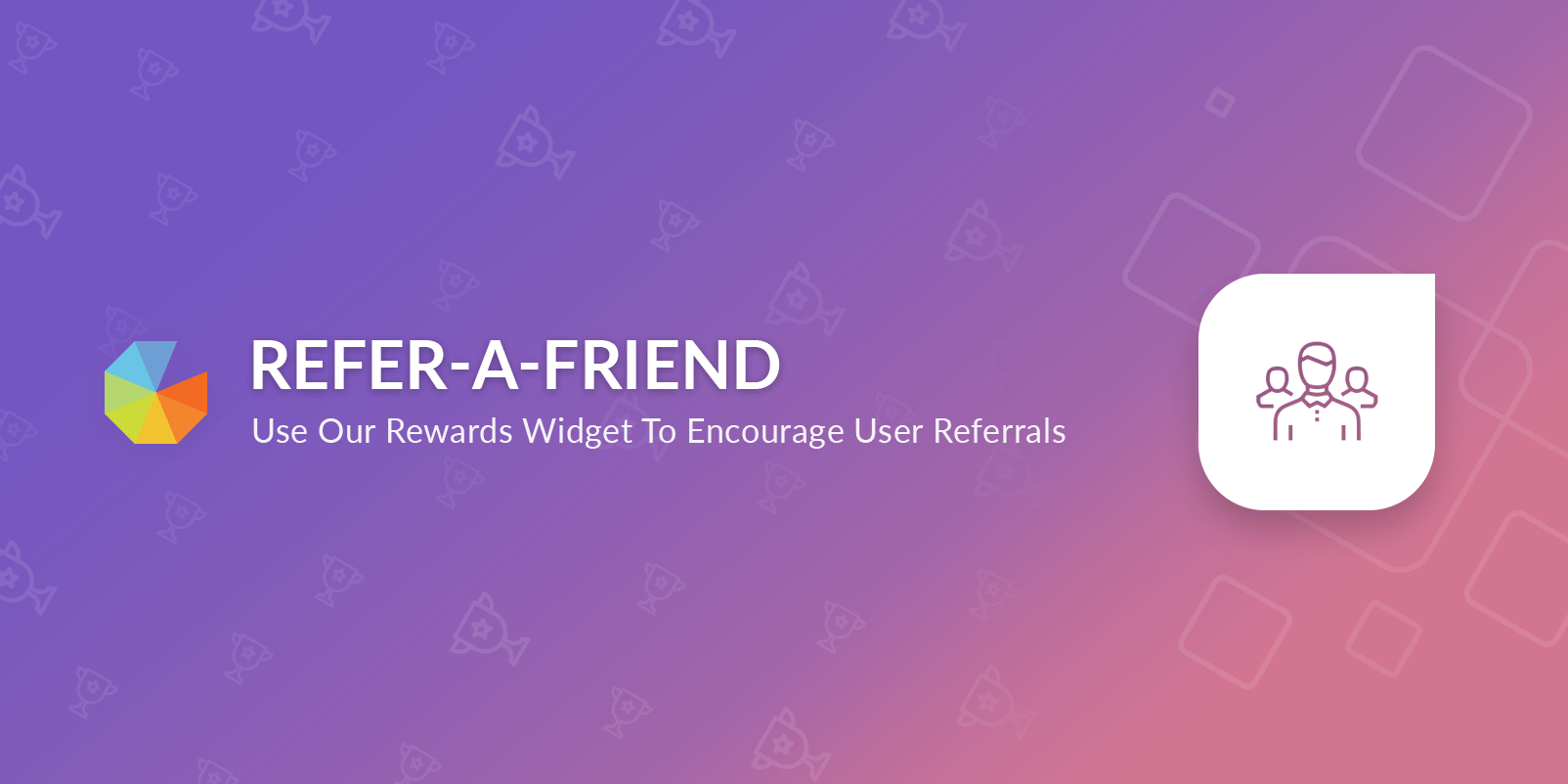 You might be looking at ways to use our Rewards widget to get users to refer friends (to also redeem the Reward). This particular configuration gets a little tricky due to the way we handle referrals in Gleam.

How Are Referrals Handled?

Rewards are instant redeem. This means that normally the user will complete a certain number of tasks, then their reward will unlock.

Our viral share action type allows you to ask users to refer their friends to a campaign. However, it only credits you when the person you refer completes at least one action.

This can cause four potential issues:

Setting Up A Refer A Friend Reward

In this guide we're going to take you step by step through how to properly setup a refer a friend reward with Gleam. You'll also find an example below to play with (and copy from within our dashboard).

Once you start a new Reward you are taken to the Setup tab. This allows you to configure some of the basic settings for your campaign. 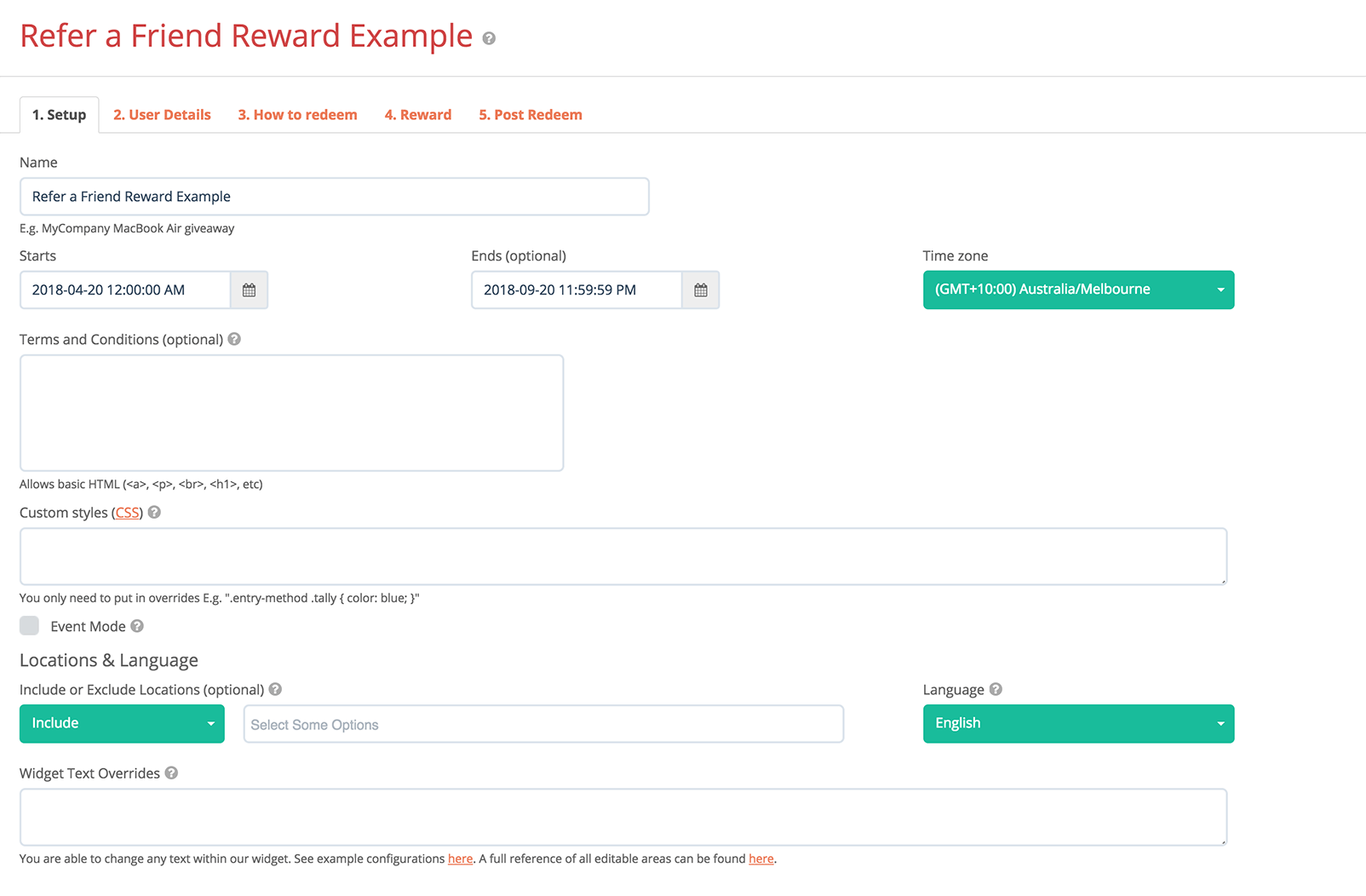 You can read more about configuring your Setup tab here.

When running a Refer a Friend Rewards campaign users will not be able to instantly unlock their reward, as they must wait until their friends also complete an action for the referral to be deemed successful. This means that you will need to send the user an email with their reward at a later date once the referral is successful. 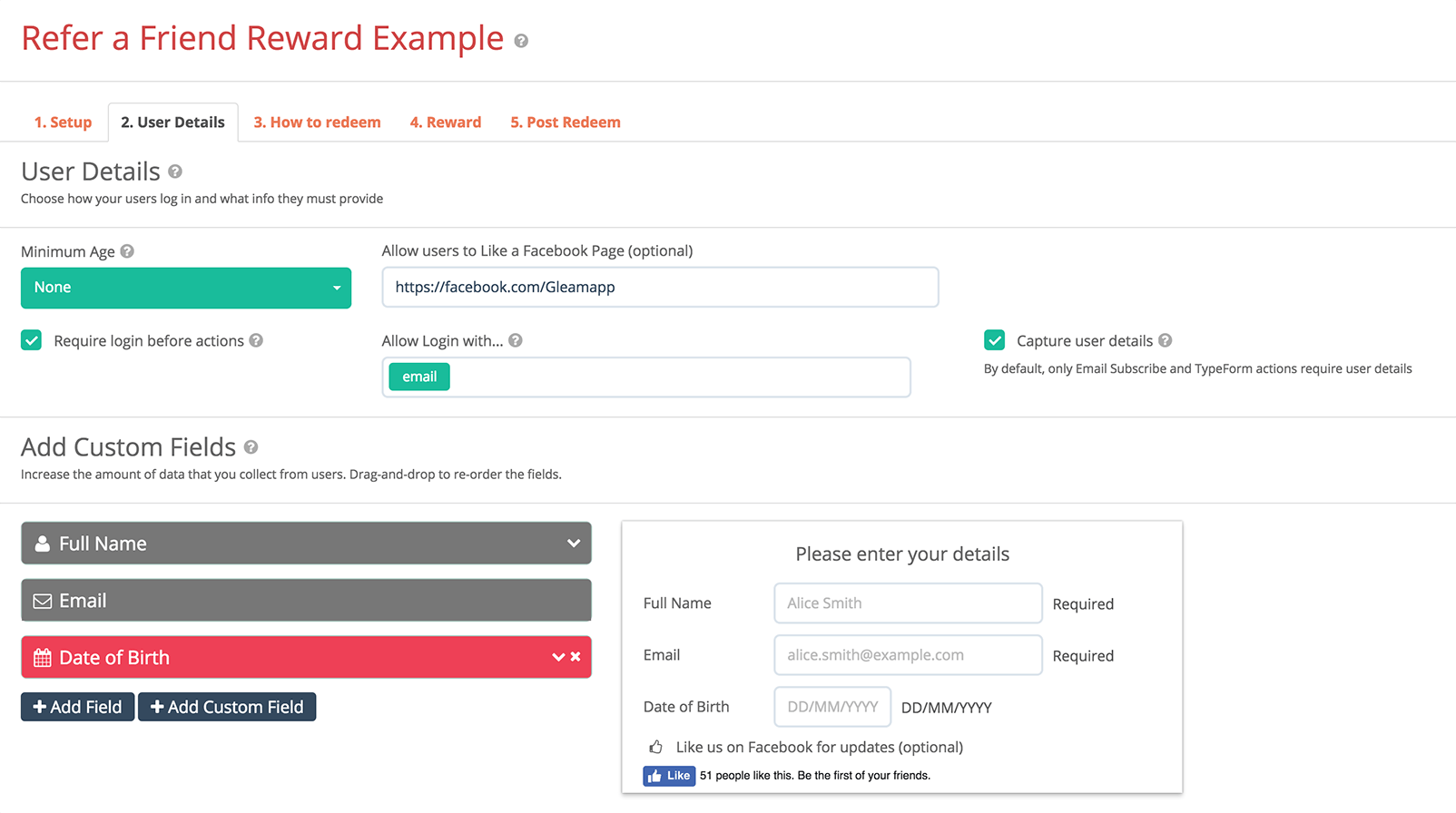 When setting up your User Details form you must select the "Require login before actions" and "Capture user details" options. This will make it mandatory for users to provide their email address and allow you to capture their information so you can email them with their reward after a successful referral.

For a Refer a Friend Reward campaign to properly function, you must include at least two actions in your campaign: the Viral Share action and an action users can complete to deem a referral successful and unlock the reward for the referring party. If you do not include this additional action you will generate a huge number of unsuccessful referrals where no one ever receives a reward.

The Viral Share action is the backbone of a Refer a Friend Reward. The action will generate a unique link which users can share with their friends across a variety of platforms. Referred users must enter the campaign via the link and complete an action before the referral is deemed successful and the original user is credited for it.

You have multiple options when setting up Viral Sharing including limits to the maximum number of referrals per user and selection of platforms users can use to share their referral code.

You can read more about setting up a Viral Share action here.

You will also need to include at least one other action in your campaign in order for the referrals to work.

If there are any other actions you want to drive you can incorporate these into your Refer a Friend campaign. You simply have to choose an action or actions from our comprehensive list of entry methods and select it as a Reward redemption method.

If you only want to drive referrals then you can use a Bonus Action to automatically grant everyone who completes your User Details form with a completed action. This approach allows users to unlock your reward by completing the User Details form and getting a friend to do the same. By not requiring any additional actions to be completed you will minimise barriers to entry and increase participation.

You can create your own automatic Bonus Action by following the template below.

You can also award automatic actions to users who fill out your User Details form by using the Subscribe Action. This will allow you to use your Referral Rewards campaign to simultaneously grow your mailing list without users having to take any additional action.

Once you have decided on your redemption methods you will be able to create your Reward.

When you run a Refer a Friend Reward campaign you have three types of rewards to choose from. You can choose the type of Reward you want to offer using the "Reward Type" drop-down list in the Reward tab. 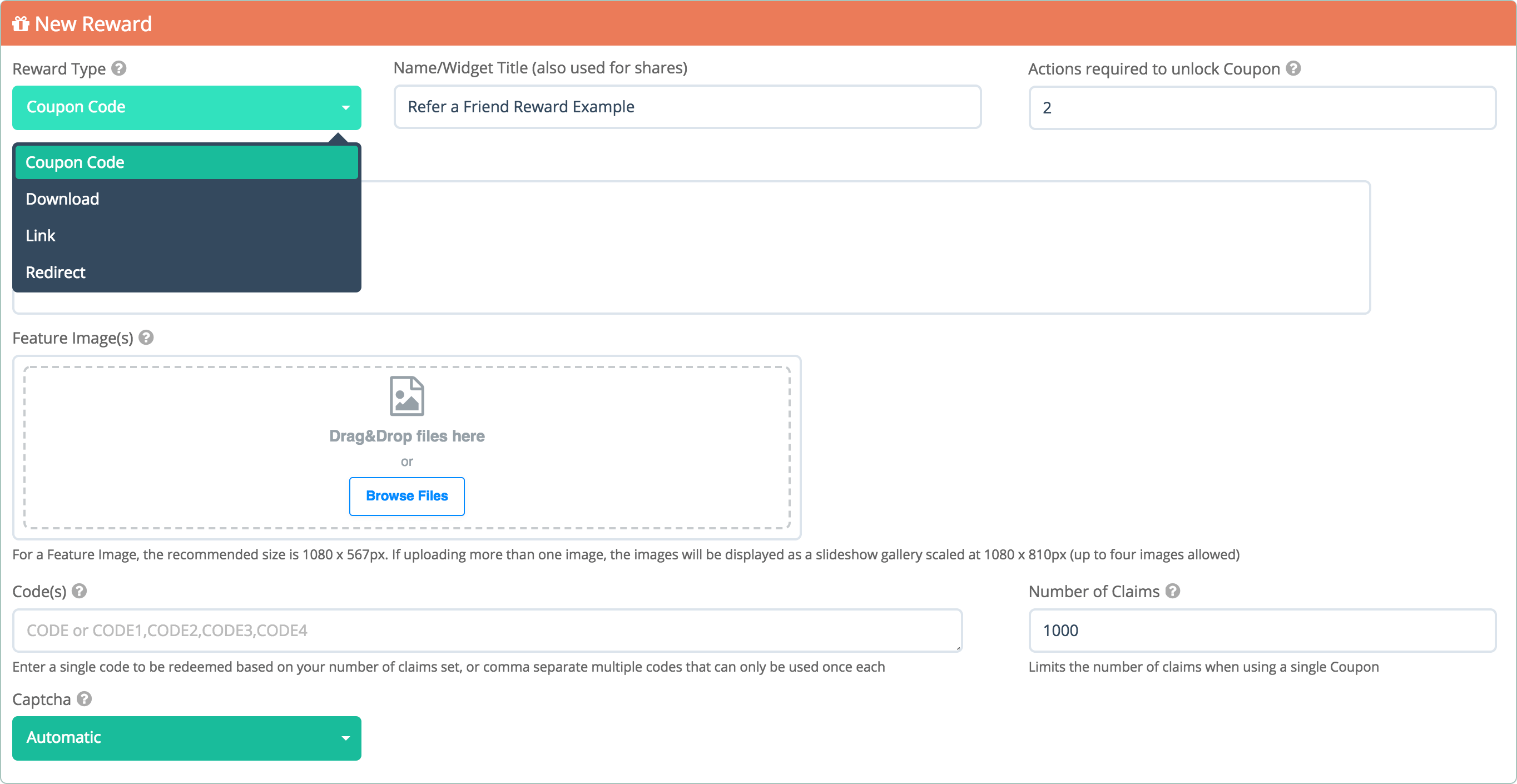 By selecting Coupons you will be able to provide your users with coupon codes as a reward. You can use these codes to offer discounts or other special offerings.

You can enter the coupon codes you are providing using "Code(s)" box in the Reward tab. If you are using one code you can limit the total number of claims that can be made.

The Download Reward option lets you provide users with a link to a download as a reward.

You can enter the download link using "Download Link(s)" box in the Reward tab. You can add scarcity to your reward by limiting the total number of claims that can be made.

The Link Reward option lets you provide a link to a webpage as a reward. This can be used to reward users with special or exclusive content.

You can enter the webpage link using "Code/Link(s)" box in the Reward tab. You can add scarcity to your reward by limiting the total number of claims that can be made.

There is a fourth type of reward (Redirect) that is usually available, but this type of reward automatically redirects users to a webpage and cannot be sent via email, so it is not compatible with a Refer a Friend Reward campaign. 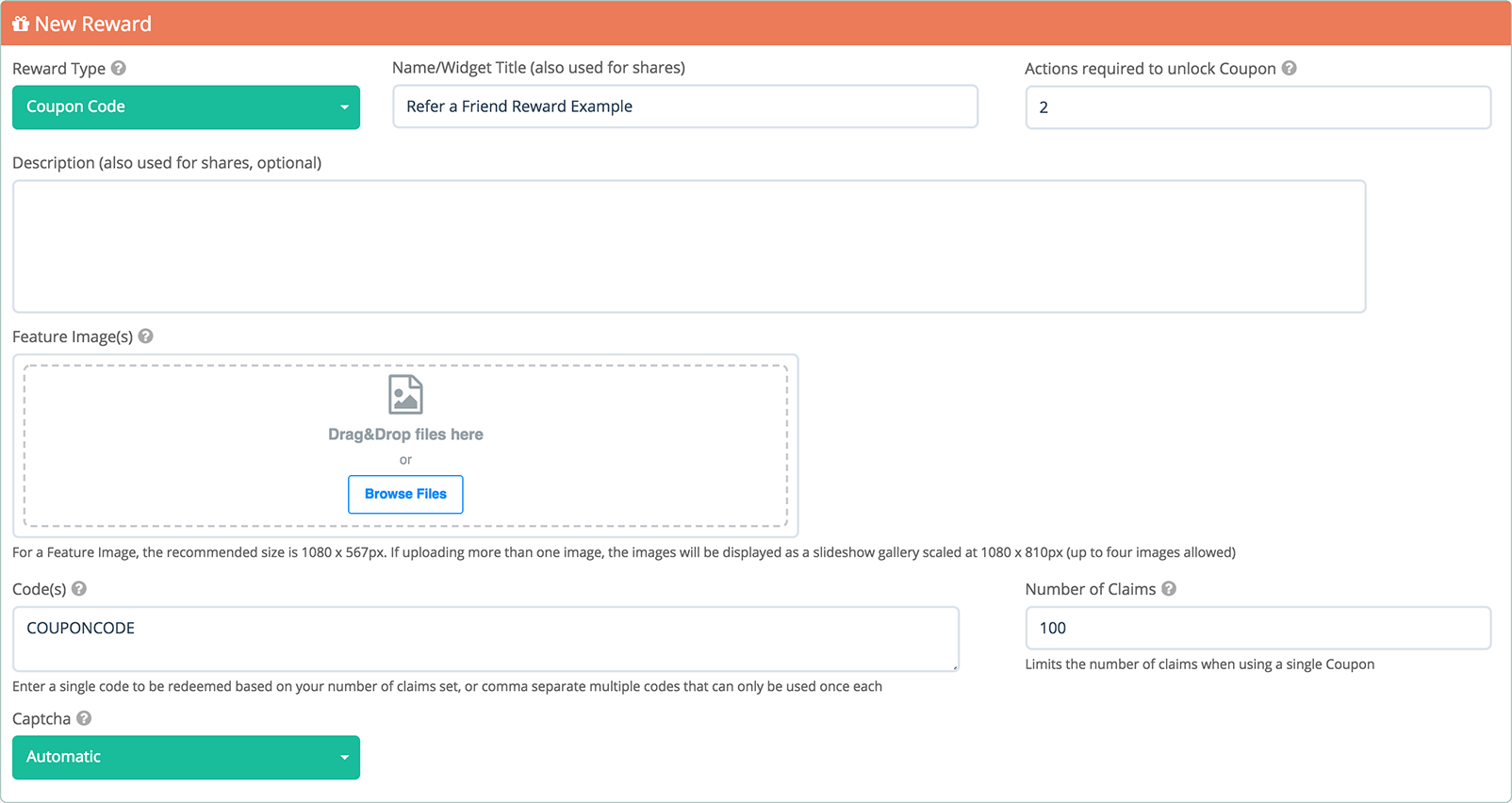 This means that if the only actions in your campaign are the Viral Share Action and the automatic Bonus Action you should set the actions required to unlock a reward to 2. This will ensure that a successful referral must have taken place before a reward is unlocked.

The Post Redeem tab allows you to customize what happens once users have unlocked your reward.

When you run a Refer a Friend Reward campaign you have several choices regarding how you deliver your reward.

The Display Reward in Widget option allows you to present the reward to users within your Rewards widget once they have completed a successful referral. In order for users to see their reward they will either have to keep your widget open, or revisit it once one of their referrals is successfully completed.

However, it is unlikely that users will still have your Rewards widget open when they unlock their reward, as it will often take time for referred users to complete actions and render referrals successful. Because of this, we recommend sending out emails containing your reward instead of or in addition to displaying the reward in the widget.

The Default Redemption Email option allows you to have default emails containing your reward sent out to users once they unlock your reward. 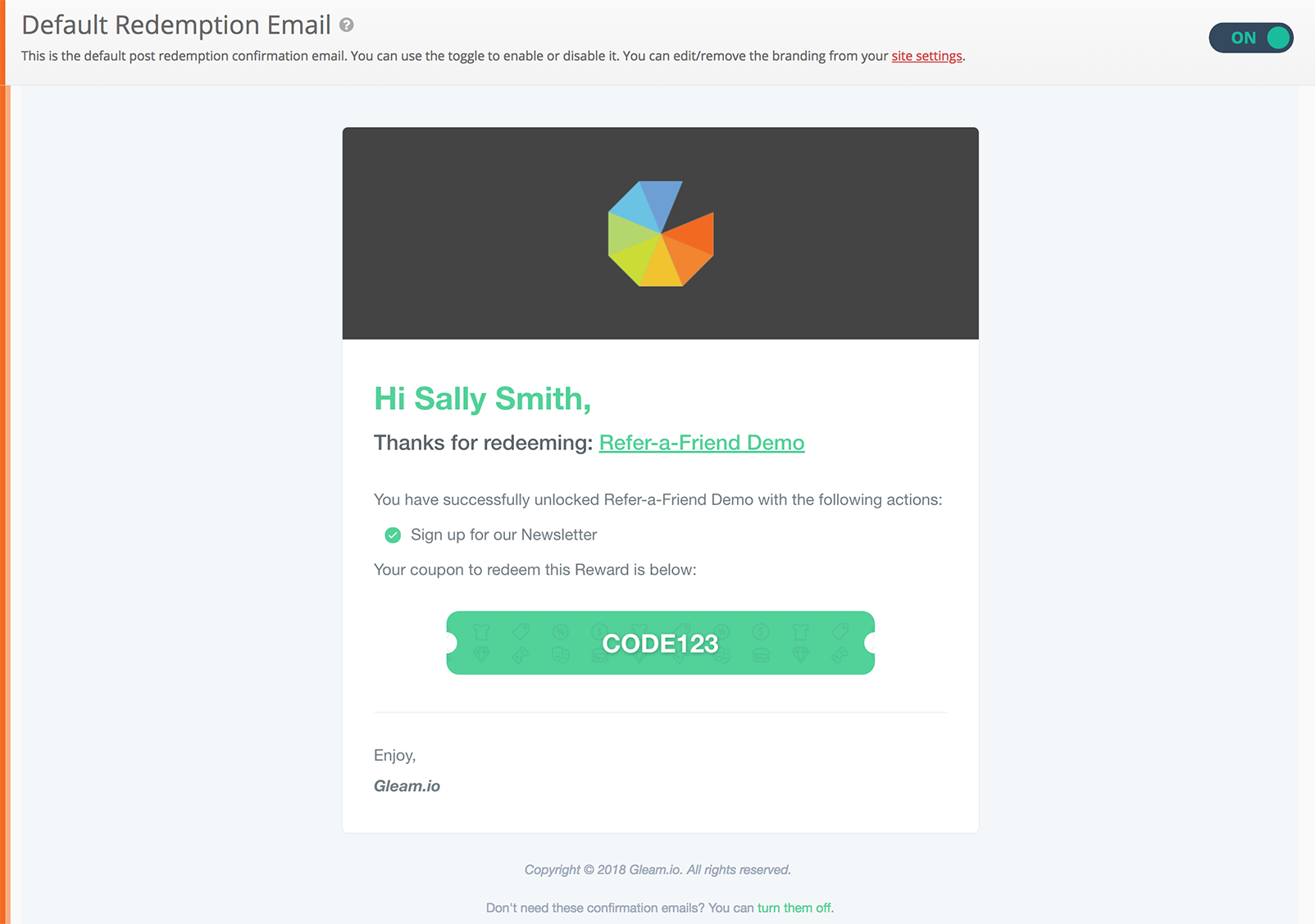 If you are on a Business Plan you have the ability to send custom emails to users which contain their reward. We have a nice WYSIWYG editor that you can use to build and preview the email. 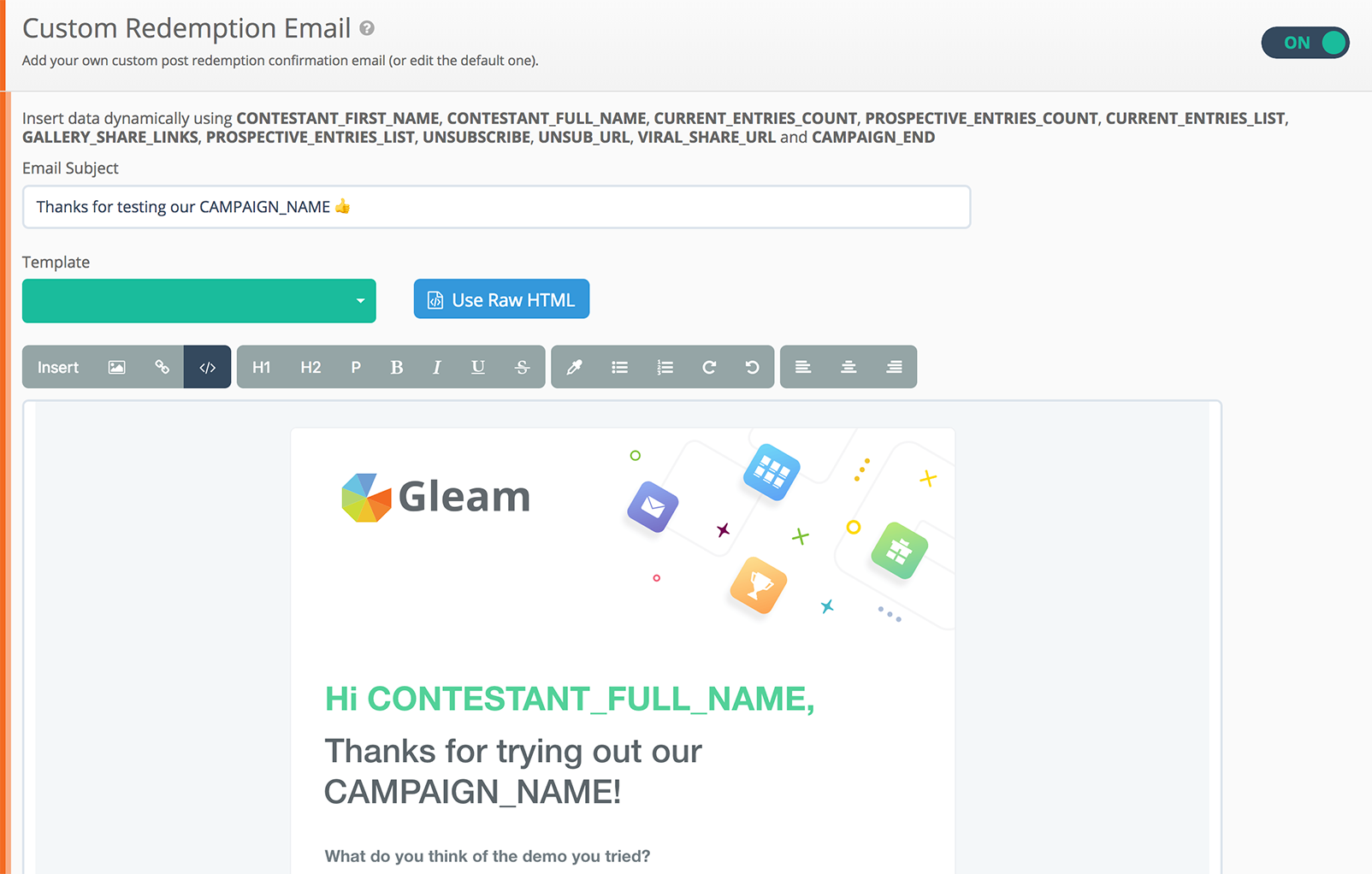 Once you have set up your Post Redeem Email you will be ready to launch your Refer a Friend Reward campaign, just make sure you find a suitable location to install your campaign. You can read all about Reward Installation Methods here.

Take a look at this demo Refer a Friend Reward to see what your own could look like.