Creating A Tiered Reward With Gleam 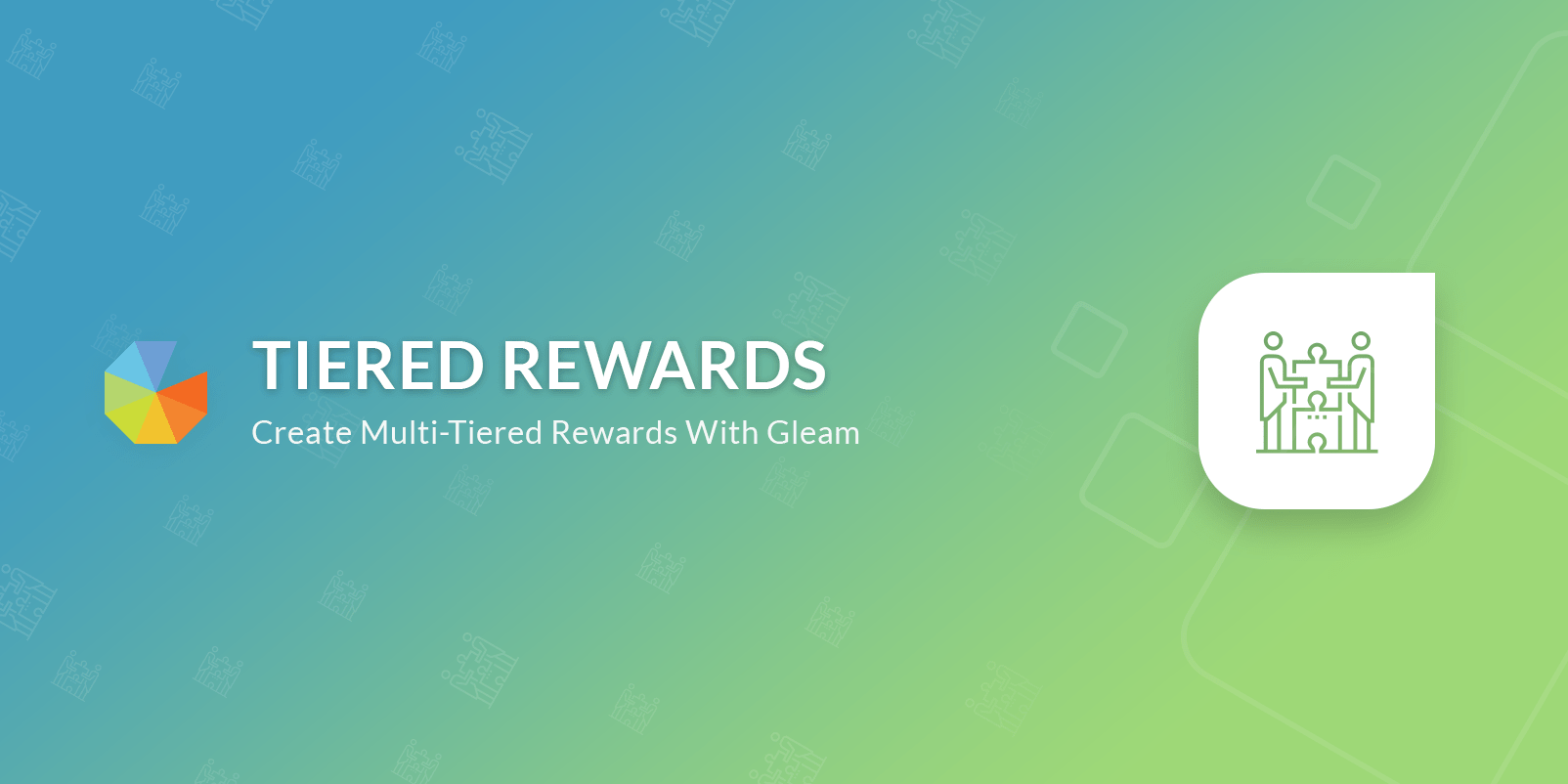 With Gleam Rewards you can create Tiered Rewards which allow users to complete actions to earn increasingly valuable incentives. This is a highly effective way to incentivise the completion of powerful actions whilst engaging and rewarding your audience.

In this guide we're going to take you step by step through setting up a Tiered Reward with Gleam so you can start creating your own campaigns, giving out coupon codes or other rewards and driving the actions that matter to you.

How Do Tiered Rewards Work?

Tiered Rewards work by using Gleam's Actions Required feature to lock actions containing your rewards until a designated number of other actions have been completed.

As users progress through your Reward they will have to complete additional actions to unlock subsequent tiers.

There are two ways to implement a Tiered Reward:

Setting Up A Tiered Reward With Coupon Action

The best way to offer a reward is by locking a Coupon action. Users who unlock a Coupon action can simply click on the action and the coupon code they have unlocked will be displayed to them within the widget.

You can use this approach to offer as many tiers of rewards as you like. All you need to do is create a Coupon action for every reward tier and lock the action until the appropriate number of other actions have been completed.

Once you start a new Reward you are taken to the Setup tab. This allows you to configure some of the basic settings for your campaign. 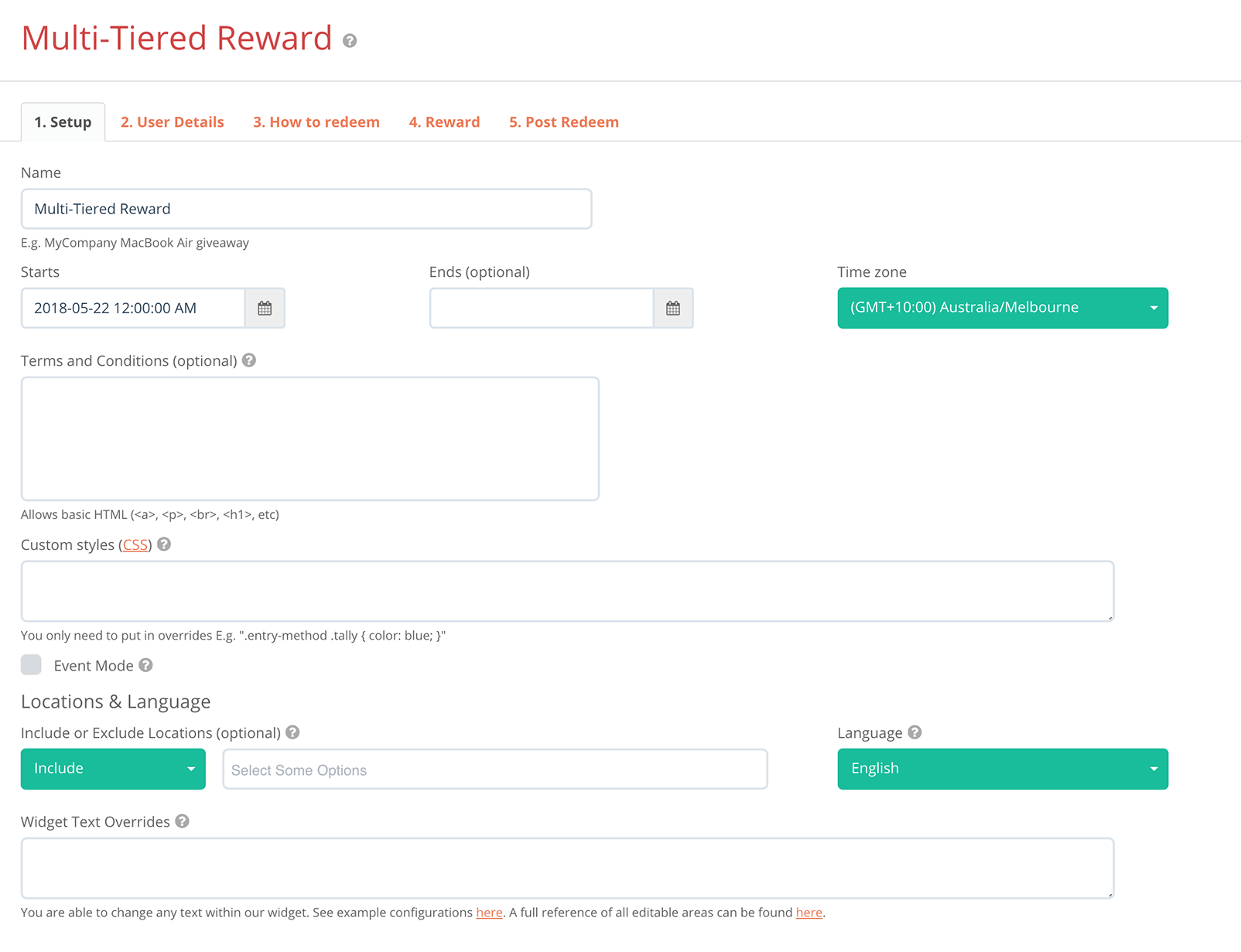 Alternatively, you can let users access your entire campaign immediately and only ask for their email address once they have completed the first tier of actions and unlocked their first reward. This has the added advantage of showing all of your tiers and rewards upfront which will help make your campaign more impressionable and encourage entry.

Also, by delaying the prompt for an email address, you will significantly reduce the number of users who are discouraged by having to provide an email address to participate in your campaign.

We recommend that you take this approach, so avoid using a User Details Form. To do this you can simply leave the User Details tab blank. 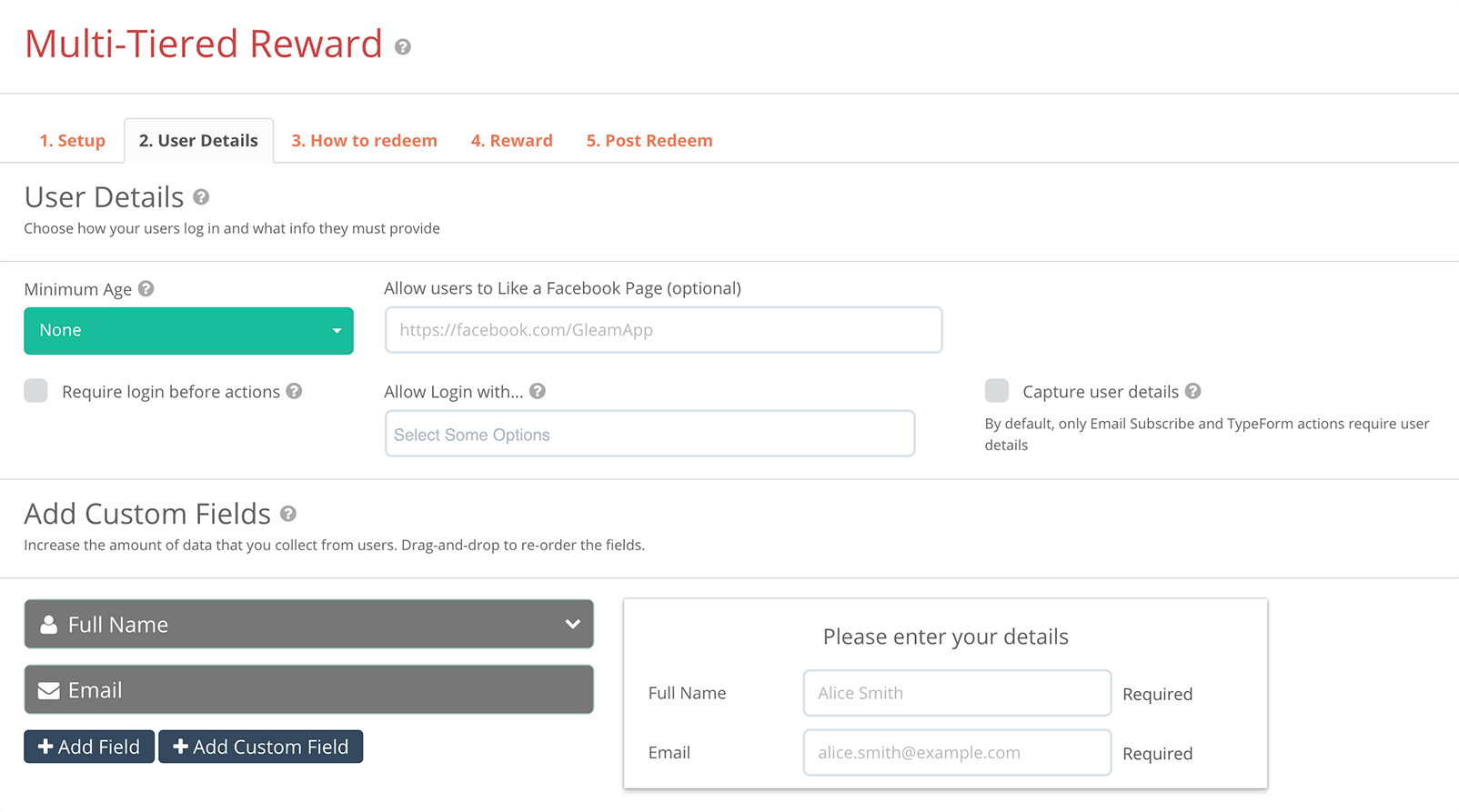 The next step is to setup your Reward's entry actions in the How to Redeem tab. To create a multi-tiered reward you should order your actions in the following way:

You can follow this pattern for as many tiers of rewards as you would like. Each tier of actions should be comprised of the actions you want to drive, and each tier of reward should be a Coupon action which you will use to dispense your rewards. 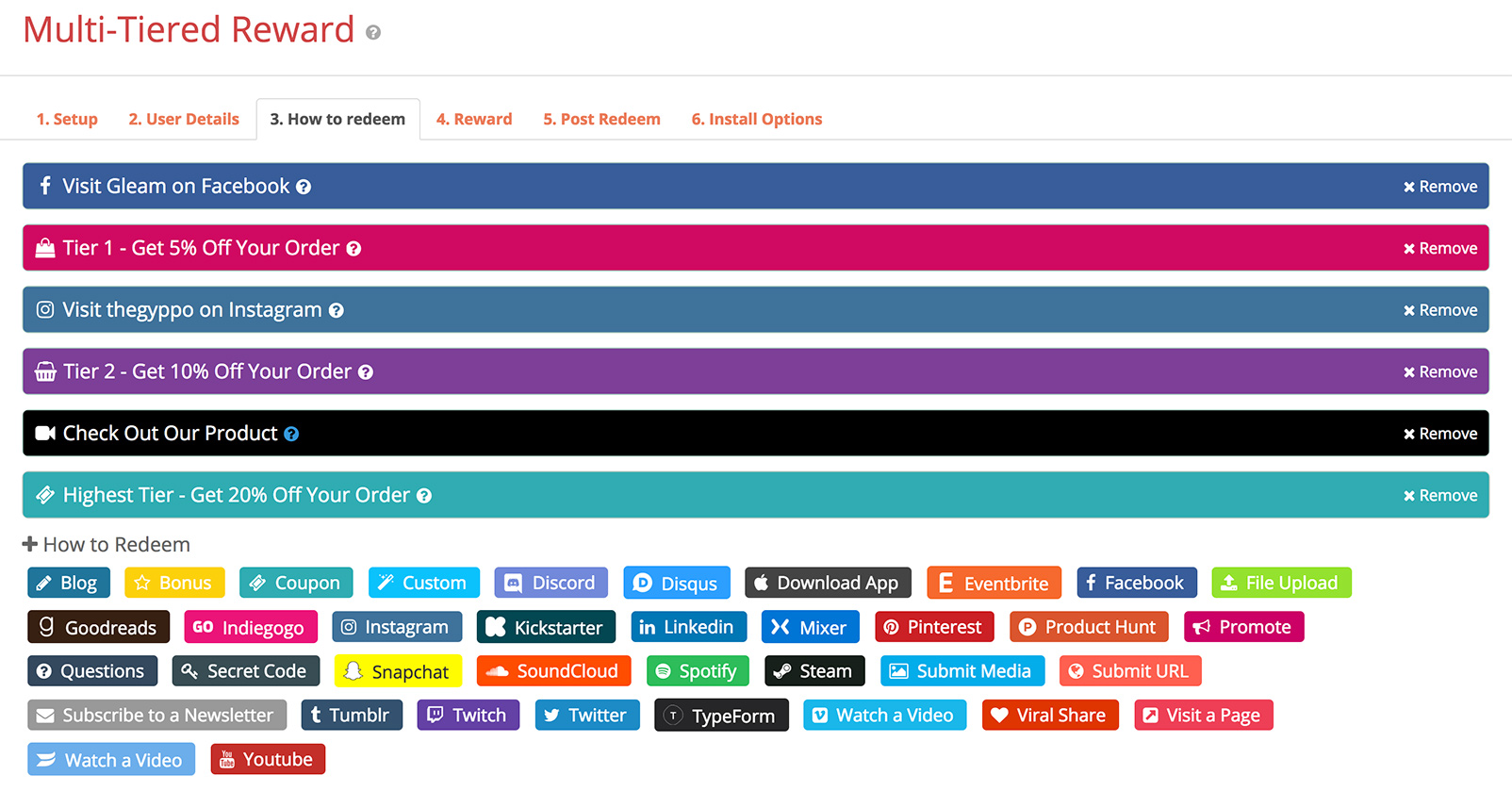 To properly order your tiers you will need to gate each of your Coupon actions by setting Actions required to the number of actions you want users to complete before unlocking it.

It's important to note that Coupon actions do not contribute towards required actions, so when setting Actions required you should not take them into account. 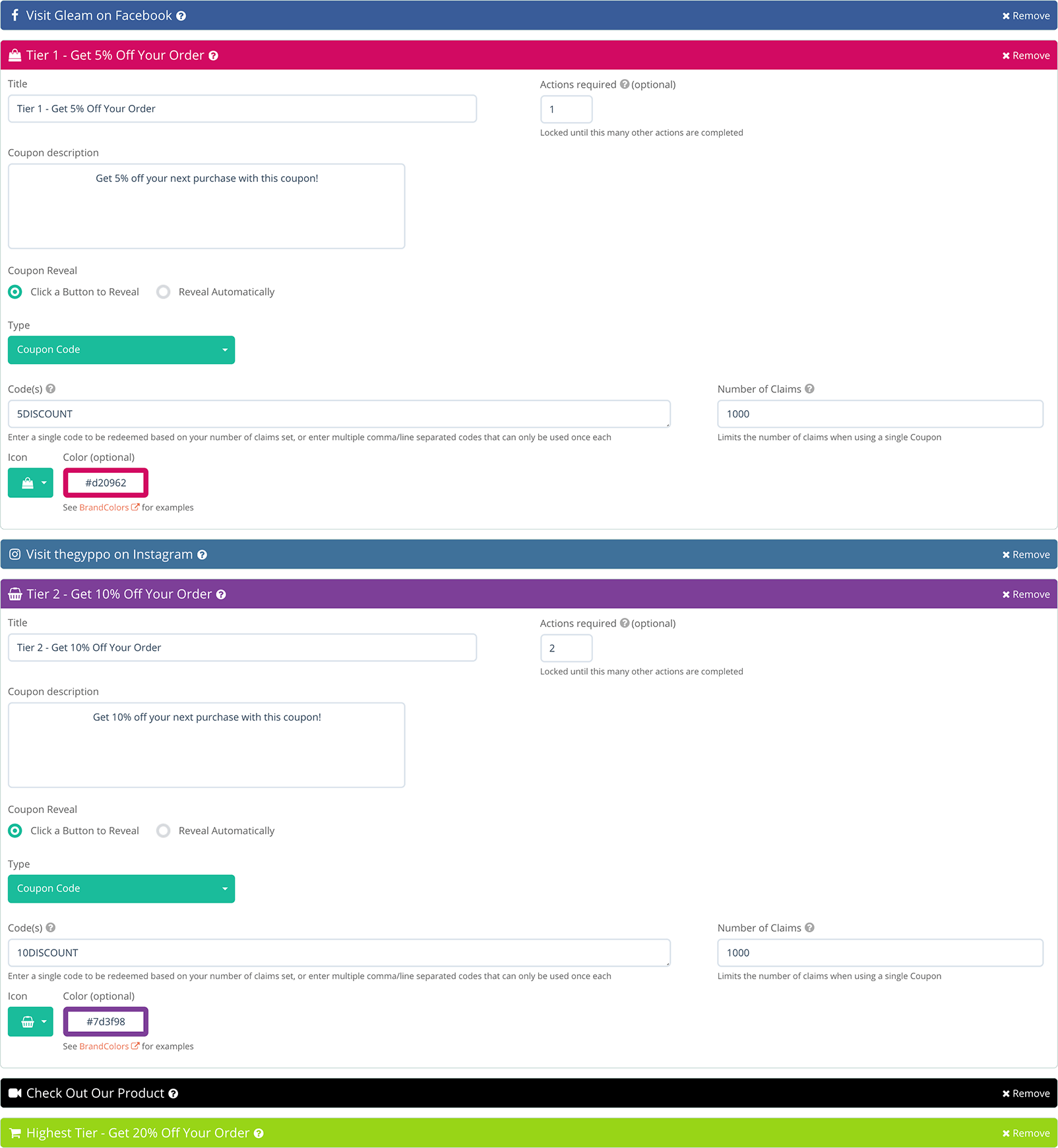 Many other actions can also be gated using Actions required settings, so if you want to require users to complete certain actions in a particular order you can easily achieve this.

When you create a tiered Reward you will need to use Coupon actions to offer your rewards. This is an incredibly easy process, all you have to do is set up your Coupon actions as we have displayed below.

Essentially all you need to do is enter your coupon codes, choose the number of times each coupon code can be claimed, set the actions required to unlock the coupon and give the action a name and description. 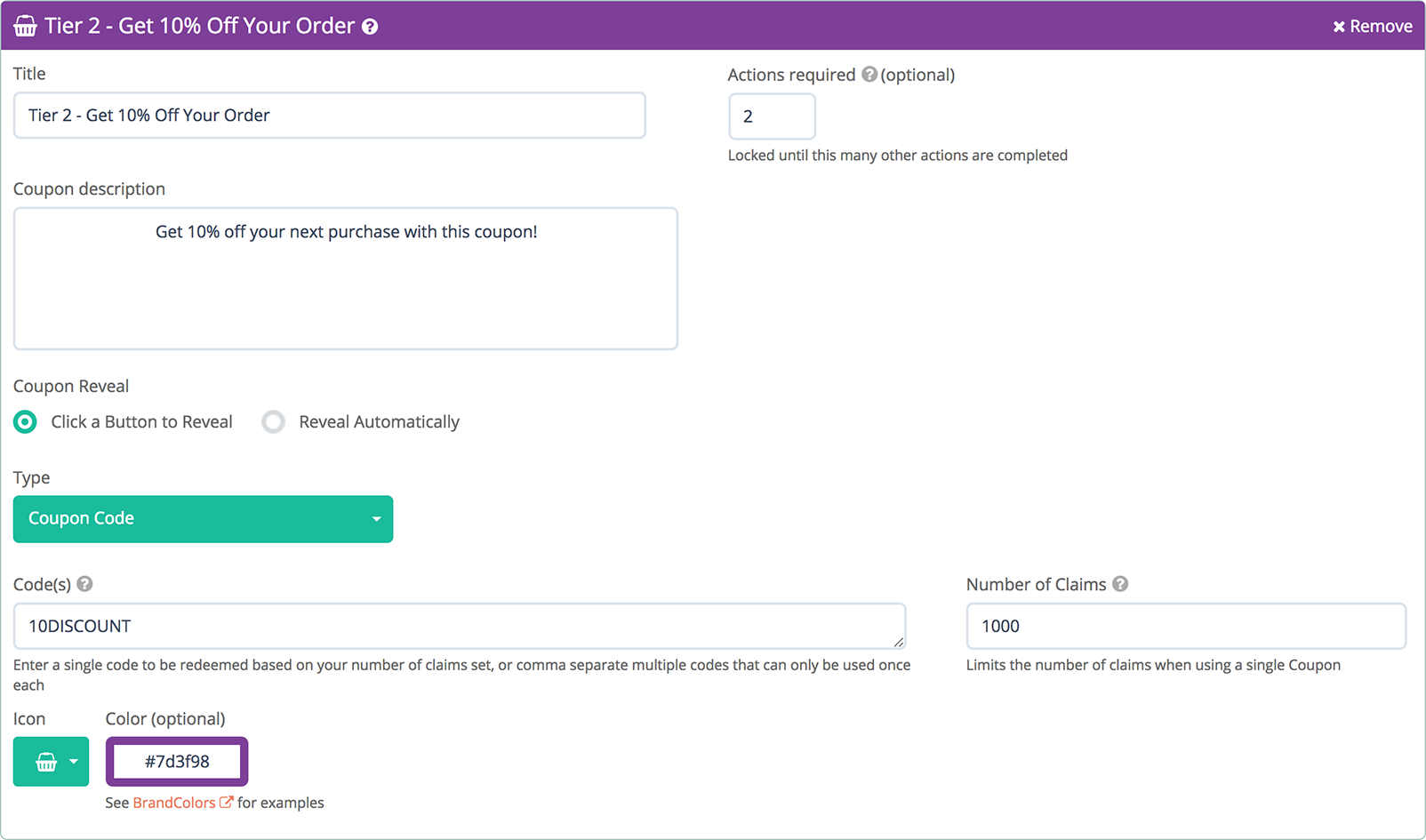 Once you have your Coupon action set up, all users will have to do is unlock and activate the action and your coupon codes will be presented to them from within the Rewards widget like this: 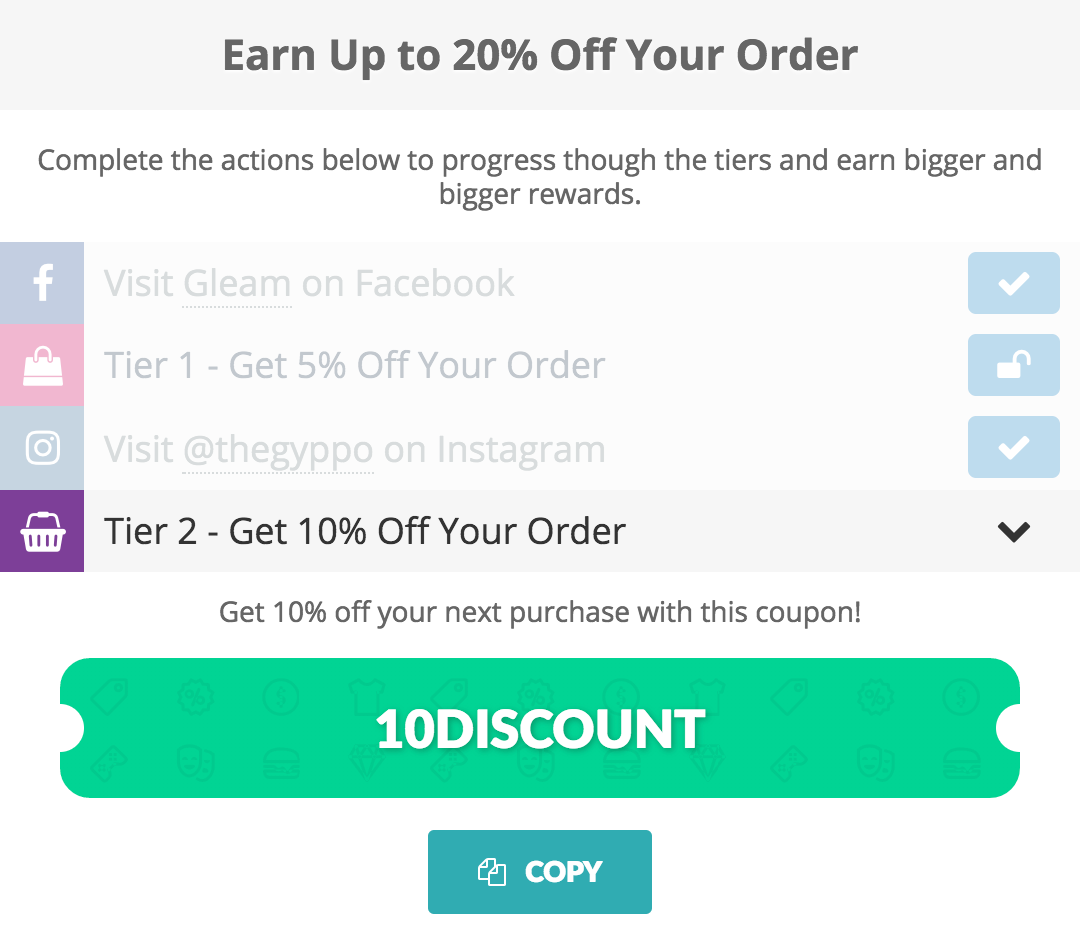 Use a Bonus Action to Unlock Your Highest-Tier Reward

When you create a tiered Reward you will need to use a Coupon action to offer every tier of reward except for the highest tier. The final reward you offer will be housed in the Rewards widget itself, and you can set it to be unlocked once every action has been completed.

In order to make the highest-tier of your Reward clear, it's a good idea to include a Bonus action which users can click to earn their final reward once they have completed every other action.

Remember to set the Actions required to however many other actions there are in your campaign, excluding all Coupon actions.

When you create a tiered Reward you will need to decide on what actions you want to incentivise with your rewards. Gleam has a wide array of actions to choose from, and the actions you choose will depend on what type of business you are, and what you are trying to achieve.

Some of the most effective actions you can incentivise with your tiered Reward include:

It's a good idea put more advanced actions such as completing a survey or watching a video towards the end of your Reward where there are more valuable rewards to incentivise their completion.

Once you have set up the actions for your tiered Reward you will move onto the Reward Tab.

This is where you will customise several key components of your campaign including the name, description and feature image. You should use your Reward's description to explain your campaign and provide some brief instructions on how users can progress through tiers and earn rewards.

You can then import your coupon code or link into the campaign by entering it under Code/Link(s) at the bottom of the tab. You can also limit the number of times your reward can be unlocked by entering your chosen number under Number of Claims.

This will ensure that users have completed every action in your campaign before unlocking your final reward. 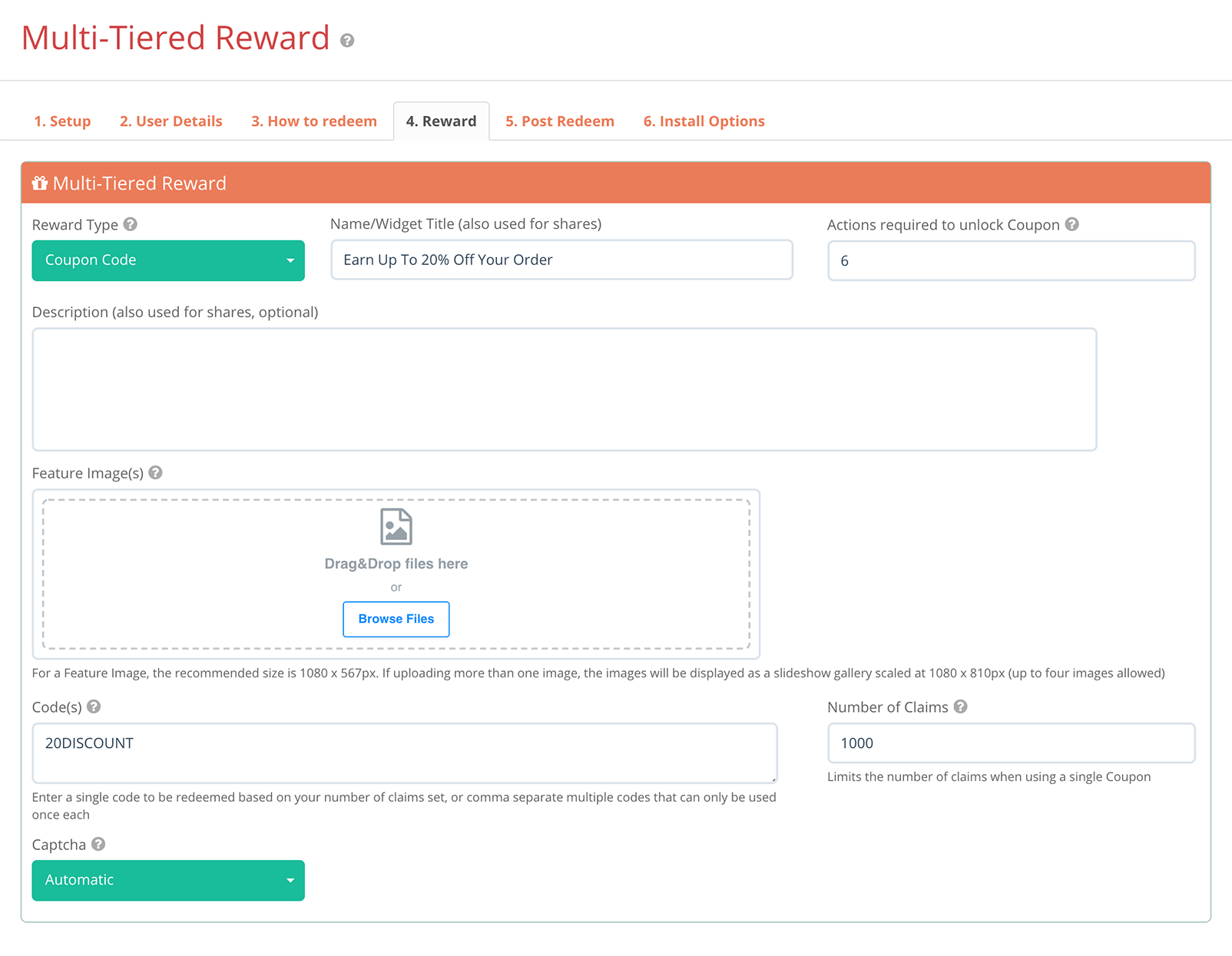 The Post Redeem tab allows you to customize what happens once users have unlocked your reward.

When you run a tiered Reward campaign you have several choices on how you deliver your reward.

The Display Reward in Widget option allows you to present the reward to users within your Rewards widget once they have completed every action and unlocked your highest-tier reward.

This is the most convenient way for you to distribute your reward as it allows you to immediately provide users with your reward in a hassle-free way. 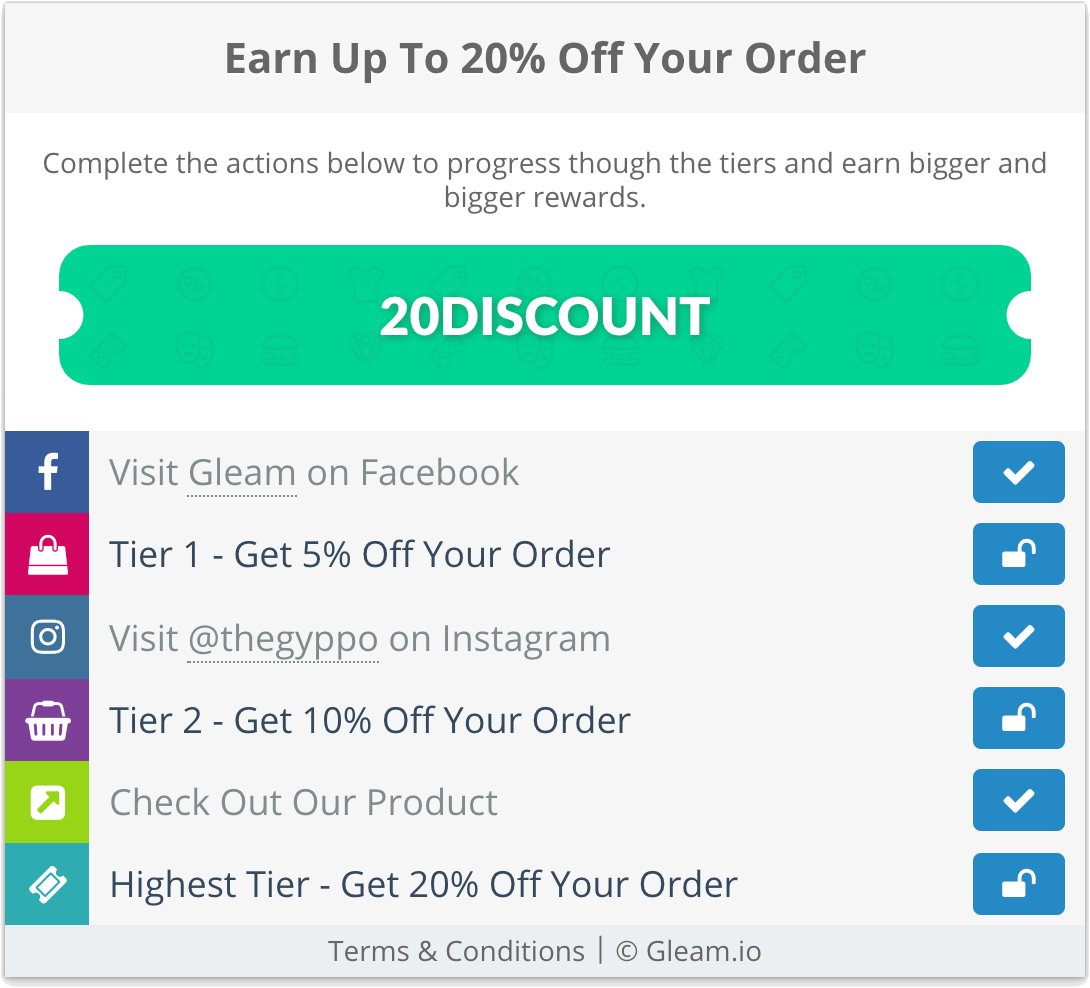 The Default Redemption Email option allows you to have default emails containing your reward sent out to users once they unlock your highest-tier reward. 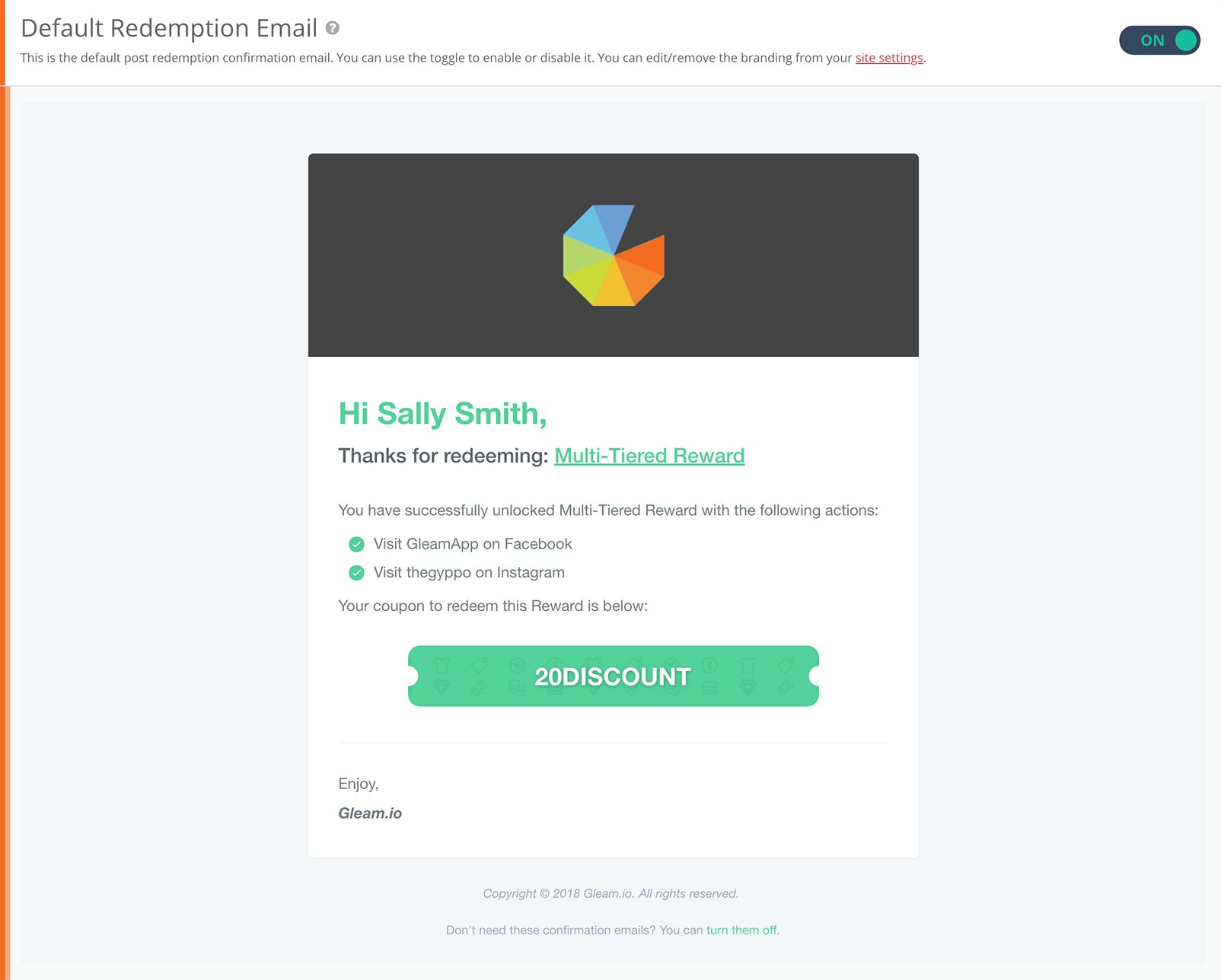 You can also choose to display your reward in the widget as well as have it emailed out to users. This is a great way to immediately provide users with their reward whilst also proving them with a backup confirmation email.

If you are on a Business Plan you have the ability to send custom emails to users which contain their reward. We have a nice WYSIWYG editor that you can use to build and preview the email. 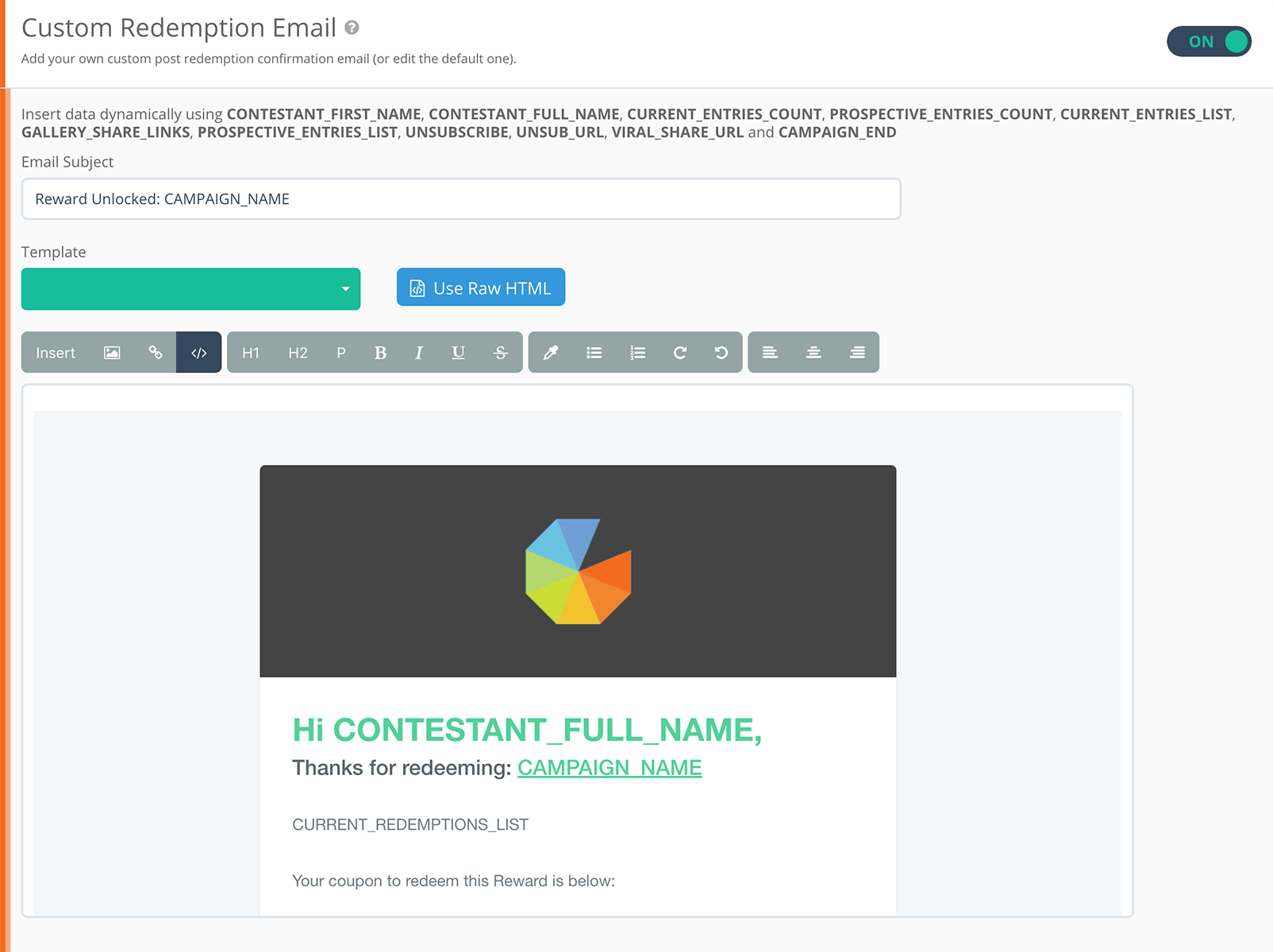 Once you have chosen how you will deliver your highest-tier reward to users you will be ready to launch your Tiered Reward campaign, just make sure you find a suitable location to install it. You can read all about Reward Installation Methods here.

An alternative to the Coupon action is to lock a Subscribe action with your reward. Users can fill in their email address and subscribe themselves to a reward-specific mailing list that you can use to mail out coupon codes or other rewards.

You can use this approach to offer as many tiers of rewards as you like. All you need to do is create a mailing list in your preferred mailing platform and create a Subscribe action for every reward tier and lock the action until the appropriate number of other actions have been completed.

Setting Up The Campaign 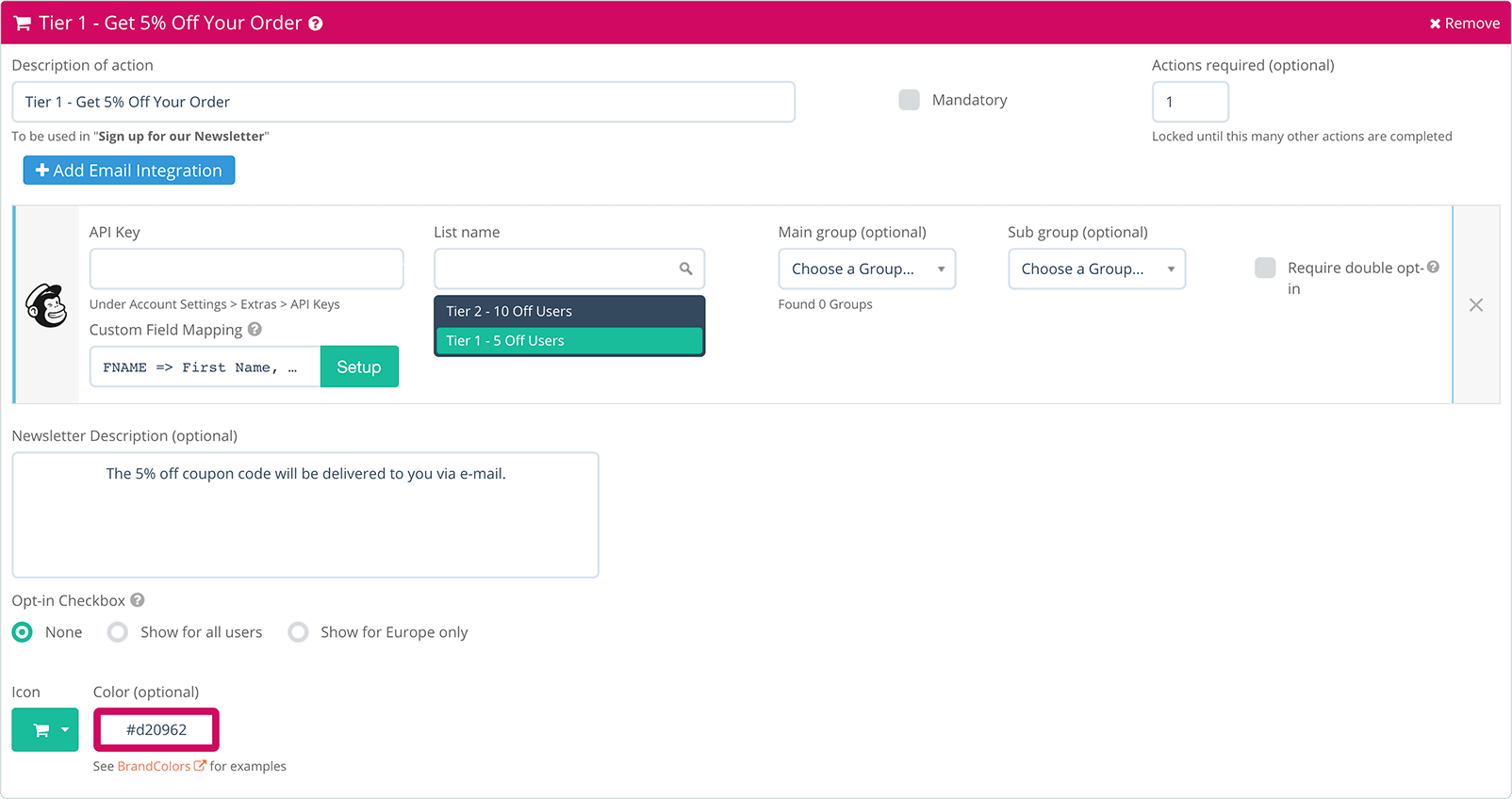 For more information, jump back to the How To Redeem section.

While the Coupon action will allow you to deliver coupon codes instantly to your user, using the Subscribe action has its own benefits, namely: